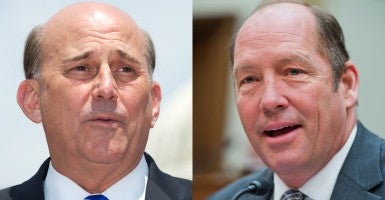 In daring moves just days before the next election for House speaker, two Republican congressman have offered themselves as alternatives to incumbent Speaker John Boehner, the party establishment’s choice.

Reps. Ted Yoho, R-Fla., and Louie Gohmert, R-Texas, announced they would oppose Boehner this weekend. The Daily Signal has learned several Republicans also are weighing a run for speaker.

Boehner, who has served as speaker since 2011, will face his first formal challenge from a member of his own party on Tuesday when lawmakers convene for the 114th Congress.

“The American people have allowed us to choose who is best suited to lead the House by electing a deep bench of diverse and qualified members,” Yoho said in a Facebook message Saturday. “Our Republic is built on choice, and if needed, I would stand up to give our members that option.”

Gohmert announced Sunday: “I am putting forward my name for consideration as speaker and hope that with a new speaker, be that me or someone else, we can fight for the ideals and principles that the voters wanted when they elected us in November.”

A formal challenge to Boehner sets up a different dynamic than two years ago when a dozen conservative lawmakers cast protest votes against the Ohio Republican even though there were no other declared candidates. Now, Yoho and Gohmert give Republicans options.

In a statement provided to The Daily Signal, Boehner spokesman Michael Steel said, “Rep. Boehner was selected as the House Republican Conference’s choice for speaker in November, and he expects to be elected by the whole House next week.”

To retain the speakership, Boehner will need 218 votes—a majority of House members. That means no more than 29 Republicans can defect.

Democrats will nominate Rep. Nancy Pelosi of California as their candidate for speaker. But unless Republicans abstain or cast their votes for Pelosi, she will be unable to reach a majority. Republicans outnumber Democrats 246 to 188 following the resignation of New York Republican Michael Grimm last week.

The Constitution allows for the election of a House speaker at the beginning of each Congress. The winning candidate needs a majority—not plurality—to be elected.

If Boehner fails to achieve a majority on the first ballot, the House would continue to vote on subsequent ballots until a winner has a majority.

Yoho was first elected to Congress in 2012 to represent northern Florida after narrowly defeating long-time Rep. Cliff Stearns in the Republican primary. He cruised to victory that November and was re-elected last year. He has a Heritage Action lifetime score of 72 percent.

The outspoken Gohmert, a Texas Republican with a Heritage Action lifetime score of 92 percent, last week outlined his top three priorities for the House: defunding Obamacare and President Obama’s immigration executive actions as well as rolling back government regulations.

In addition to Yoho and Gohmert, Reps. Jim Bridenstine of Oklahoma and Thomas Massie of Kentucky released statements over the past two days saying they wouldn’t support Boehner.

“The CR/omnibus legislation sufficiently undermines the checks and balances enshrined in the Constitution that it warrants my pending vote against the speaker,” Bridenstine wrote for The Daily Signal. “John Boehner went too far when he teamed with Obama to advance this legislation. He relinquished the power of the purse, and with it he lost my vote.”

Bridenstine praised Yoho for offering himself as an alternative to Boehner.

“The idea that John Boehner and Nancy Pelosi are the only two alternatives is incorrect,” Bridenstine said. “Now we have a real choice. Members must decide if they are for the status quo or for a change in direction.”

Massie, meanwhile, cited “dysfunction” under Boehner’s watch as the reason for his opposition to the Ohio Republican.

“My constituents expect better and America deserves better,” Massie wrote in a statement. “I will vote for a new speaker who will consistently articulate a constitutional vision for America and facilitate an inclusive and orderly legislative process that allows Congress to truly reflect the will of the people.”

Several other Republicans, including six who were elected in November, voiced support for an alternative to Boehner during their campaigns. They include Reps.-elect Glenn Grothman of Wisconsin, Jody Hice and Barry Loudermilk of Georgia, Gary Palmer of Alabama, John Ratcliffe of Texas, and Mark Walker of North Carolina.

In addition to Bridenstine and Massie, other Republicans opposed Boehner for speaker two years ago. Those still in the House include Reps. Justin Amash of Michigan, Tim Huelskamp of Kansas, Walter Jones of North Carolina, and Steve Pearce of New Mexico. Yoho and Gohmert also opposed Boehner in 2013.

Last year, The Hill identified at least three others who could oppose Boehner: Reps. Paul Gosar and Matt Salmon of Arizona, and Steve King of Iowa.

This story was updated to include news of Gohmert’s announcement.