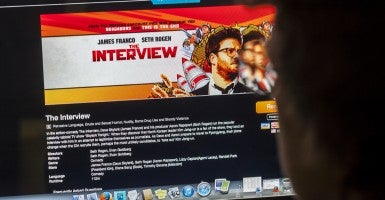 An activist has decided to bring “The Interview” to the people of North Korea.

Park Sang-hak, a North Korean defector and an activist against its regime, will launch into North Korea balloons carrying DVDs and USBs containing the controversial film, according to the Associated Press.

“The Interview” depicts the death of the country’s dictator, Kim Jong Un.

“North Korea’s absolute leadership will crumble if the idolization of leader Kim breaks down,” Park told the AP.

Park said he plans to send 100,000 DVDs and USBs with the movie into North Korea.

North Korea has repeatedly demanded that South Korean protests be stopped, but according to the AP, Seoul has refused, “citing freedom of speech.”

Park has partnered with the Human Rights Foundation to finance previous drops of DVDs and DVD players into the Hermit Kingdom.

Human Rights Foundation founder Thor Halvorssen told The Hollywood Reporter that Hollywood is “is largely unaware” of just how effective their films are at introducing North Koreans to the outside world.

“Viewing any one of these is a subversive act that could get you executed, and North Koreans know this, given the public nature of the punishments meted out to those who dare watch entertainment from abroad,” Halvorssen said. He added:

Despite all of that there is a huge thirst for knowledge and information from the outside world. North Koreans risk their lives to watch Hollywood films … and “The Interview” is tremendously threatening to the Kims. They cannot abide by anything that portrays them as anything other than a god. This movie destroys the narrative.

It is unclear how successful the campaign will be in a country where citizens often lack even the most basic communications technology. The AP reports that North Koreans must obtain permission from the government to own a computer, and that they often cost as much as three months’ salary.

According to the Washington Post, “access to televisions and DVD players [in North Korea] is believed to be more widespread.”

“In a totalitarian country the state endeavors to control all citizens, and so every activity that is not government-sponsored is a subversive act,” Halvorssen told The Hollywood Reporter. “Watching a film is a crime for which you can be executed.”

HRF recently launched the #HackThemBack campaign, an initiative through which “private citizens can help North Korean defectors, who are very excited about the film, amplify, refine and intensify efforts to break the monopoly of information that the Kim regime imposes over its 25 million people.”

The initiative seeks to “hack” the North Korean regime by providing its citizens with information about human rights and liberty via balloon drops, radio waves and DVDs.