Did Your State Raise Its Minimum Wage Today? 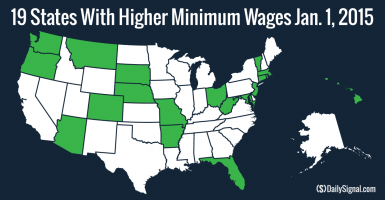 At the stroke of midnight today, 19 states increased their minimum wage. Residents of three more and the nation’s capital can expect hikes later on this year.

A year ago, the White House and Democratic lawmakers embarked on a campaign to make the minimum wage a defining issue in the 2014 elections. And although that didn’t pan out exactly as planned at the federal level, nearly half the states took action on the issue.

In his State of the Union address last January, President Obama urged members of Congress to pass bills from Sen. Tom Harkin, D-Iowa, and Rep. George Miller, D-Calif., to raise the federal minimum wage to $10.10.

Federal legislation was met with resistance, though. Republicans argued raising the minimum wage would cause an increase in prices for consumers and low-wage workers likely would face layoffs as companies grappled with the higher costs associated with hiked wages.

Some of those concerns were validated last month by a University of California, San Diego, study. For three years, researchers followed low-income workers residing in states that saw wage hikes and those that did not. The study found that minimum wage hikes had negative impacts on employment, income and income growth. Fast-food workers in the Los Angeles area striking to raise the federal minimum wage to $15 per hour in August 2013. (Photo: Jim Ruymen/Newscom)

Where wages are increasing

In three states—Arkansas, Nebraska and South Dakota—voters approved ballot measures in November to increase the minimum wage, effective Jan. 1, according to the National Conference of State Legislatures.

Alaska voters passed an initiative raising the minimum wage in the state to begin Jan. 1. But the pay increase isn’t effective until 90 days after the election results are certified, Feb. 24.

Though Delaware and Minnesota’s state lawmakers voted to raise the minimum wage, those increases won’t begin until June and August, respectively. The District of Columbia will see a minimum wage hike beginning July 1.

Among states raising the minimum wage, Washington state will boast the highest at $9.47 an hour–but only until July 1, when the District of Columbia will have the highest in the nation at $10.50 an hour.

That’s still below the $15 an hour minimum wage that fast-food workers called for in protests in major cities across America.

“Minimum wage supporters have good intentions, but those good intentions cannot repeal the law of unintended consequences,” James Sherk, an expert in labor economics at The Heritage Foundation, told The Daily Signal. He added:

Minimum-wage increases reduce the total earnings of low-wage workers — the higher pay for some workers gets completely offset by the nonexistent pay of those no longer employed.

In its study, UCSD researchers found that after minimum-wage increases, the national employment-to-population ratio decreased by 0.7 percent points between December 2006 and December 2012.