Charlie Rangel Promised to Retire. So Why Is He Asking for Donations in This Police Brutality Email? 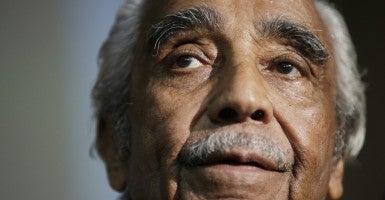 Rep. Charlie Rangel, D-N.Y., is using alleged police brutality victims to raise money for a re-election campaign he promised not to run.

“The historical election of President Obama doesn’t mean the end of racism and injustice in America,” says @cbrangel

Rangel, the veteran Harlem congressman, barely eked out an electoral victory this year in part by vowing to retire in 2016.

But citing the deaths of Michael Brown and Eric Garner at the hands of police, Rangel earlier this month asked supporters to pony up for another electoral bid.

“The historical election of President Obama doesn’t mean the end of racism and injustice in America. It didn’t suddenly heal the wounds that have been left through the centuries of racial hatred and prejudice,” he emailed. “Whether it’s Eric Garner or Mike Brown, these unjustifiable deaths remind us that we’ve come a long, long way from how we got here, but we have a long way to go.”

The “Contribute” button at the bottom of the email links to a “Re-Elect Charlie Rangel” page for credit-card donations.

Supporters are encouraged to fill Rangel’s campaign coffers so they can “make a difference in this election.” The Dec. 4 email also urges voters to attend various rallies across the country to protest alleged police brutality, including one taking place that day in New York City.

Don’t be a bystander of injustice. In New York City and across the country, there are peaceful protests, poignant gatherings and vigils to demand justice and demonstrate that black lives matter. In New York, the NAACP and other groups will be meeting at 5:30 PM at Foley Square (Worth and Centre Streets downtown). Join together to say: this stops today!

We’ve come a long, long way from how we got here, but we have a long way to go.

In January, Johnson quoted an unnamed Rangel opponent calling his  promise to retire “a stunt.”

Rangel was first elected to represent Harlem in 1970.

Rangel communications director Hannah Kim told The Daily Signal that the email, which asked for money, was actually not soliciting donations.

“While this [non-official matter] is something I don’t comment on,” Kim said, “I want to set the record straight that it wasn’t a ‘fundraising’ letter but about his comments on their wrongful deaths and mention of a rally that was taking place late afternoon that day.”