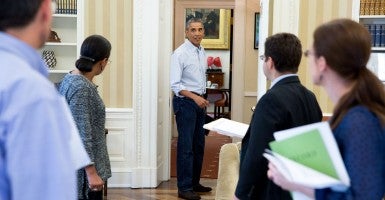 U.S. District Judge Andrew S. Hanen of the Southern District of Texas has scheduled a hearing for Jan. 9 on the request for an injunction filed by 25 states against President Obama’s immigration amnesty plan.

In a nationally televised speech on Nov. 20, Obama announced (and began implementing) the executive actions. The original lawsuit was filed on Dec. 3, and the states requested an injunction hearing by Dec. 31 “or as soon as practicable thereafter.”

The lawsuit claims that Obama has “unilaterally suspend[ed] the immigration laws as applied to 4 million of the 11 million” illegal aliens in the United States.

The states (see the full list at the end of this article) are requesting that Hanen find that the Department of Homeland Security directives implementing Obama’s plan violate the “take care that the laws be faithfully executed” clause of the Constitution, as well as various provisions of the Administrative Procedures Act because they are arbitrary, capricious, an abuse of discretion and were issued without regulatory authority or the required notice and opportunity for public comment.

On Dec. 24, the Justice Department filed a 56-page response on behalf of the administration opposing the request for an injunction and asking the court to dismiss the lawsuit for lack of standing because the states cannot “demonstrate that they will suffer a cognizable injury traceable to the deferred action guidance.”

Obama has a new ally on his side in this fight over immigration—goat farmers of America.

The Justice Department says that all of the increased, substantial costs of law enforcement, education and health care that the states claim will result from the president’s action are mere conjecture and are not sufficient to grant them standing.

The Justice Department argues that the states don’t have a right to bring an independent claim under the “take care” clause of the Constitution, and that the “deferred action” on the immigration status of illegal aliens implemented by Homeland Security is an unreviewable exercise of enforcement discretion.

In other words, deferred action is within the prosecutorial discretion of the president and his authority to enforce the law. It should be noted that a federal judge in Washington, D.C., recently dismissed a lawsuit filed by Arizona Sheriff Joe Arpaio, finding that he lacked standing based on many of the same arguments that the Department of Justice is making in the Texas case. The Justice Department also argues that the “guidance” or directives issued by Homeland Security are exempt from the Administrative Procedures Act as “a general statement of policy.”

According to the Justice Department’s brief, “statements issued by an agency to advise the public prospectively of the manner in which the agency proposes to exercise a discretionary power” are exempt from the Administrative Procedures Act requirements. DOJ claims that Obama’s plan falls within this definition.

Justice makes the claim that issuing an injunction would actually harm the government and “the public interest” because the president’s amnesty plan “promotes congressionally mandated public safety and national security objectives.”

Supposedly, because the government has limited resources, this plan will allow the government to “focus its removal efforts on criminals, threats to national security and more recent border crossers, while recognizing important humanitarian considerations.” But, as has been reported, Homeland Security already is spending its “limited resources” on hiring 1,000 new employees to implement the president’s amnesty program at a new operational center in Virginia. This is certainly a very important case and a serious challenge to the executive branch by almost half of the states in the union over a substantive public policy and constitutional issue. And we will hear the issues being debated and argued on Jan. 9 by an impressive array of skilled lawyers.

But in a humorous note, a goat farmer from Florida filed a motion to intervene in the lawsuit on Dec. 29 on behalf of Obama.

Apparently, his best goat sales are to “persons from abroad [who] are much more likely to want to buy a goat for special occasions or feasts than long [term] resident Americans.” According to the farmer, if the “helpful new rules to allow undocumented migrants to remain in the country” are ruled unconstitutional, “this would be likely to reduce possible goat sales to the Intervenor’s disadvantage.”

So Obama has another ally on his side in this fight over immigration—goat farmers of America.

Here are the 25 states involved in the lawsuit:

This article has been corrected to reflect that 25, not 24, states are involved in the lawsuit. Tennessee was excluded from the original list.