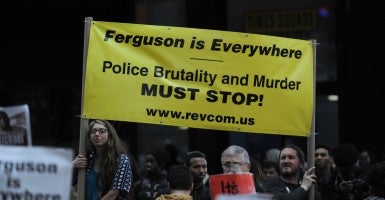 Mixed among the faces of protesters nationwide calling for justice in the deaths of Eric Garner and Michael Brown is a group of Communists fueling a movement against police officers and calling for mass demonstrations.

The Revolutionary Communist Party USA actively organizes and participates in protests against the deaths of Garner and Brown, who were both black and were killed by police officers. Now, the group is preparing for a New Year’s Eve protest that calls for an end to police brutality through whatever means possible.

The Chicago-based group, founded in 1975 and led by chairman Bob Avakian, advocates for socialism with the “final goal of a communist world.”

The Revolutionary Communist Party did not return multiple phone calls and emails from The Daily Signal requesting comment.

Photos from demonstrations in New York City show protesters carrying signs calling for the end of police brutality, with the Revolutionary Communist Party’s website written across the bottom.

The myth-debunking website Snopes.com pointed out it’s unlikely the Revolutionary Communist Party planned and organized protests. However, multiple photos (including two purchased from Newscom by The Daily Signal for this article) and posts on the party’s website show that the group is, in fact, involved in protests against police officers.

According to a correspondent for Revolution, the party’s newspaper, many people stood behind the Revolutionary Communist Party’s banner at a Dec. 13 protest in Washington, D.C., organized by Al Sharpton. More than 100 people took signs from the group advocating for an end to police brutality. On Dec. 13, Al Sharpton organized a protest in Washington, D.C., to call for an end to racial profiling. (Photo: Stephen Shames/Polaris/Newscom)

In the latest issue of Revolution, Carl Dix, a founding member of the Revolutionary Communist Party, issued a call to action to supporters to end the “business as usual in Amerikkka” that “includes wanton police murder of black people.”

>>> Why an Indiana Police Officer Created This ‘Breathe Easy’ T-Shirt

“We should live in a society where those who are entrusted with public safety would sooner risk their own lives than kill or injure an innocent person,” Dix wrote. “But in this society, cops who brutalize and murder are given the benefit of the doubt and are almost never punished in any way for their crimes.”

“If you think that police murder must stop, be out in the streets with that message on New Year’s Eve,” says Carl Dix of the Revolutionary Communist Party USA

Dix asked supporters of the Revolutionary Communist Party to gather on New Year’s Eve for mass protests and emboldened them to “figure out imaginative ways” to punish law enforcement officers.

“If you think that police murder must stop, be out in the streets with that message on New Year’s Eve,” he wrote. “Say in a loud, clear voice—No new year under this old system! And—We can’t breathe!” Also appearing in the newspaper was a reprint of a 30-year-old essay from Avakian. Titled “Richard Pryor Routines … or Why Pigs are Pigs,” Avakian discusses what he says is police officers’ “murderer’s mentality”:

Pigs are pigs. Of course, that’s an image, a symbol—in the most literal sense they are human beings, but they are human beings with a murderer’s mentality, sanctioned, disciplined, unleashed by the ruling class of society to keep the oppressed in line, through terror whenever necessary and as the ‘bottom line,’ as they like to say.

In addition to participating in protests, supporters of the Revolutionary Communist Party made a splash at a Nov. 24 press conference held by Missouri Gov. Jay Nixon. Larry Everest, a reporter with Revolution, interrupted Nixon to ask if he believed that a lack of an indictment would “green light” police violence across the country.

Everest went on to ask Nixon to address calls from Dix and the Revolutionary Communist Party to protest if Wilson was not indicted.

The group joined demonstrators in Ferguson, Mo., after Brown was shot and killed in August. The following month, the group called on its supporters to travel to the St. Louis suburb for a march on Oct. 11.

“Your participation in this struggle to achieve justice will make a huge difference in strengthening the people on the front lines here in Ferguson and in other parts of the country,” the notice said.

Then, in anticipation of the grand jury decision on whether or not to indict Ferguson police officer Darren Wilson, who shot and killed Brown, Dix called on Revolutionary Communist Party members to “pour into the streets immediately” once the decision was handed down:

If the authorities let this murdering pig walk, America must be brought to a halt. Major streets and highways should be blocked, and traffic should be unable to proceed on bridges and tunnels. Professional athletes should join the response by refusing to play. Musicians should cancel appearances. Students should walk out of school when they hear that another murdering pig has gone free.

Todd Gitlin, a sociologist and professor at Columbia University, told Talking Points Memo in August the group appears at places of “social outrage,” though similar organizations have disappeared over the years. Additionally, the Revolutionary Communist Party’s operation mainly consists of efforts to recruit new members and spread the group’s message by passing out flyers on “the periphery of crowds.”

“They have an MO, which is of parasitism,” Gitlin told TPM. “They glom onto a cause, and then they roll with it. They read the papers, and they made a bee-line for Ferguson is what I would guess. They’re always looking for signs of the coming revolution.”

Google this "revcom.us" see who is behind Ferguson protest. SURPRISED? pic.twitter.com/Joxmd4NiU5

Garner died in July after Pantaleo put him in a chokehold.

The decisions sparked protests across the country. Demonstrators blocked traffic on interstates, flooded shopping malls and took to city streets chanting “I can’t breathe”—Garner’s last words—and using the “hands up, don’t shoot” gesture that has become a symbol of Brown’s death.