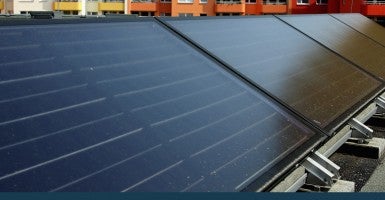 A different sort of green energy issue has sparked bipartisan action on Capitol Hill as lawmakers move to address allegations of deceptive practices in sales of rooftop solar panels.

Earlier this month, 12 Republican members of the House of Representatives wrote to the Federal Trade Commission, warning that leasing solar panels from a third party may be a harmful investment for homeowners.

“To a lot of folks, these leases sound really good,” said Jeff Small, legislative director for Rep. Paul Gosar, R-Ariz., who spearheaded the letter to the FTC. “But when you dive into the details, it proves too good to be true.”

Small, in an interview with The Daily Signal, said Gosar supports efforts to use alternative energy sources such as wind and solar, and that his concern is about “worrisome” sales practices and not the product.

Gosar is co-sponsor of a bill to streamline the permitting process for using wind and solar energy on federal land.

“The congressman is by no means anti-solar,” Small said. “There is a lot of solar potential in Arizona. Because this is an emerging industry, there is not a lot of oversight.” The House Democrats who wrote to the Consumer Financial Protection Bureau are Arizona’s Ann Kirkpatrick, Kyrsten Sinema and Ron Barber, along with Gene Green of Texas.

Solar leases are becoming a popular arrangement for those who don’t want to pay an upfront fee for rooftop solar panels, consumer advocates say. Leasing companies have access to federal tax credits for installing solar.

Leases usually have terms of 20 years and require monthly payments.

The congressmen suggest it’s difficult for consumers to calculate whether those payments will be less than the amount they save by generating their own electricity with solar power.

To encourage introduction of rooftop solar panels, many states approved a billing system called net metering, where homeowners can sell any excess power generated to their region’s electric company.

“The question is, at what price am I selling it at?” Pociask said, adding that a state’s public service commission sets the price for excess power sold to a utility:

If I sell it at the retail price, it is a loss for the utility’s ratepayer consumer. That means that consumers that can afford to put solar panels on their roof are being subsidized by consumers who cannot afford to do the same. There is probably a fair price that would encourage a homeowner to want to do this, but right now [third-party solar panel leasers] are misleading consumers and stretching assumptions about the benefits of leasing solar panels.

Pociask recommends that the FTC come up with “common language” for contracts between a homeowner and a solar panel leasing company.

“These things need to be put in plain language,” Pociask said, adding:

If I am going to do a deal with you to sell or buy something, and I understand the contract better than you do, who is coming out on the better side of the deal? There should be a requirement that certain promises are known up front. There needs to be better information so people can make better buying decisions.

In their letter to the FTC, the Republican congressmen suggest there “appears” to be a need for a “resource center” for consumers to weigh the risks of leasing a rooftop solar panel.

The lawmakers note that customers have filed class-action lawsuits in California and Louisiana.

“Diversity in energy is a good thing,” Pociask said. “There is something attractive about solar energy. We all want to reduce our dependence on fossil fuels. But in the process, we’ve created a cottage industry that rips off consumers.”

In a story last month in the Arizona Republic, SolarCity Corp. of San Mateo, Calif., which controls most of the solar leasing market in the United States, defended its sales practices.

SolarCity accused the Arizona Public Service Co., the biggest utility in the state, of lobbying Congress to oppose its services.

“SolarCity depends on positive word of mouth to sell our systems, and unlike APS [Arizona Public Service Co.], we have to satisfy our customers in order to make money,” SolarCity spokesman Will Craven told the newspaper, adding:

People go solar because they talk to their neighbors, and they hear positive stories. Unlike APS, our customers know exactly what they’re going to pay for solar electricity for the next 20 years. It is known that [APS parent company] Pinnacle West has been lobbying Congress, and they are the likely source of this misinformation. However, as a market leader that prioritizes consumer protection, SolarCity looks forward to working with CFPB and members of Congress on this important issue.