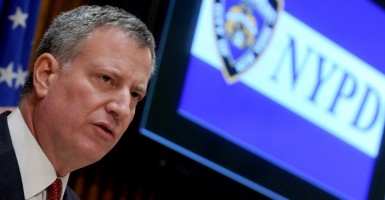 The lawyer who chairs the New York City agency responsible for investigating police brutality allegations has ties to the federally funded legal-aid group featured in a cop-killer video.

Richard Emery, chairman of the city’s Civilian Complaint Review Board and his own civil-rights law firm, told The Daily Signal that any perceived conflict of interest is absurd.

Bronx Defenders, which received at least $1.5 million from the Obama Justice Department since 2009, says on its website that assistance from Emery’s firm, Emery Celli Brinckerhoff & Abady, “makes the work we do possible.” Asked how the New York Police Department could trust his fairness given these connections, Emery said, “I am sure your mother has connections by two, three or six degrees to a murderer.”

Emery was picked by New York Mayor Bill de Blasio to chair the Civilian Complaint Review Board in July. The board is responsible for investigating New Yorkers’ complaints about NYPD misconduct.

“I am sure your mother has connections by two, three or six degrees to a murderer,” says Richard Emery.

At the time of his appointment, Emery  said, “I am honored to continue working to protect New Yorkers’ rights, ensuring everyone is treated fairly. We will tirelessly work to safeguard our collective values of justice and mutual respect.”

When contacted about the video for the rap song “Hands Up,” Emery accused The Daily Signal of “doing [Patrolmen’s Benevolent Association president] Pat Lynch’s bidding” to “stir up” racial tensions.

Lynch did not immediately reply to a request for comment. Lynch previously told the New York Post the cop-killer video “goes well beyond the parameters for protected speech and constitutes a serious threat to the lives of police officers.”

In his interview with The Daily Signal, Emery called the video “reprehensible” and claimed Bronx Defenders was “duped” into participating.

“BD does fine work as public defenders,” Emery said. “That is why we support them.”

Ward, the Bronx Defenders board chairman, could not be reached. His secretary said he is on vacation and he did not immediately respond to a request for comment.

In addition to his roles with Bronx Defenders and Emery’s firm, Ward was appointed by de Blasio in July to serve on the Mayor’s Advisory Committee on the Judiciary. He previously served on the Civilian Complaint Review Board.

Bronx Defenders has publicly stated it did not know the cop-killer video would contain images of police with guns to their heads.

But the organization has declined to say if it knew about the lyrics calling for the murder of police officers. Meanwhile, Bronx Defenders executive director Robyn Steinberg, who last week ignored repeated inquiries and yesterday hung up the phone when The Daily Signal asked if her group funded the video, now insists they did not.

Shortly after hanging up, Steinberg responded in an email to The Daily Signal, “The Bronx Defenders did not fund or sponsor the video.”

Steinberg did not respond to a follow-up emails and phone calls asking what she knew in advance about the video and if she regretted participating.