Unions Are Waging War on These Small Businesses 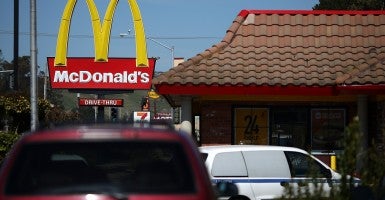 The National Labor Relations Board just charged several dozen McDonald’s franchises with unfair labor practices. In an unusual move, the NLRB also charged McDonald’s Corp. as a co-defendant with its franchisees. As I wrote in August, these charges are part of a larger push by unions to curtail the franchise business model.

Small-business owners run most fast-food restaurants in the United States. They often purchase the rights to use a brand name — such as McDonald’s — in exchange for agreeing to meet price and service standards. The franchisees, however, run the rest of the business as they choose. They choose whom to hire, what to have them do and how much to pay them. Federal labor law has long recognized franchisees as the sole employer of their employees.

Unions want to change that. They want to make the corporate brand the “joint employer” of franchisees’ employees, despite having no control over their employment. Why? In short, unions prefer trying to organize a handful of big businesses to trying to organize thousands of small ones. (For more information, read the earlier article.)

Unions now find it easier to pressure businesses to accept unionization than to persuade workers to accept their services. As Joe Crump, former secretary-treasurer of United Food and Commercial Workers Local 951, put it:

Who do we really need to convince of the advantages of being union? Employees or employers? . . . Employees are complex and unpredictable. Employers are simple and predictable. We [unions] can use these conclusions to our advantage in a pressure [unionizing] campaign.

Unfortunately for unions, the franchise model has created tens of thousands of small businesses across the country. They present a much more difficult target than a handful of large firms. So unions want to effectively do away with franchising. By making McDonald’s Corp. a joint-employer, they can try to pressure it into foisting “card check” (i.e., no secret-ballot vote) on its franchisees.

Of course if McDonald’s Corp. faces liability as an employer, then it has to control employment decisions. It can’t expose itself to lawsuits for activities outside its control. If the NLRB’s “joint-employer” theory stands, it would cripple the franchise business model.

Fortunately, it probably won’t stand. The law expressly allows franchising. Earlier this year the NLRB general counsel admitted “We have a problem legally for our theory.” Sadly, that did not stop him from filing charges.