The Most Outrageous Government Scam of 2014 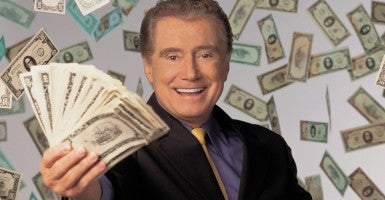 It's like they're playing the game "Who Wants to Be a Millionaire?" With taxpayer money. (Photo: Newscom)

For outrageous government scam of the year, it’s hard to compete with the news of the supersized public-employee pensions in California. If you haven’t already heard: In 2013, an assistant fire chief in Southern California collected a $983,319 pension last year. A police captain in Los Angeles received nearly $753,861. Talk about a golden parachute. The report on Golden State government pensions contains a list that runs pages and pages of hundreds of “public servants” who have hit the pension jackpot with annual pensions of a half-million a year. It’s like they’re playing the game “Who Wants to Be a Millionaire?” With taxpayer money.

By some estimates, the unfunded pension liabilities in California have eclipsed $750 billion, which means that in a few years, residents will be paying their already-highest in the nation income and sales taxes not for roads, bridges, schools and public safety but for retired employees living like Daddy Warbucks.

This same scandal — only on a slightly smaller scale — is happening in most states. The crisis dates back 20 to 30 years ago when public-employee unions negotiated fat pension deals with state and local politicians that were like ticking time bombs in municipal budgets. The fat and happy politicians who bought union votes didn’t care much. They’d be long gone when these grenades detonated and the fiscal carnage began.

Americans know instinctively that this is no way to run a city or state, and that the enormous pensions border on larceny from public treasuries. This will eventually cause rip-roaring problems for state and local budgets. Now we have a story from middle America of what happens when the crisis hits a financial boiling point. Look no further than Scranton, Pennsylvania.

Scranton is a middle-class, blue-collar town of 76,000 with severe financial problems. The city recently raised its property taxes for 2014 by more than 50 percent and those taxes are expected to rise by another 20 percent in 2015. The city had to also raise various fees, such as the charge for garbage collection, by two-thirds. It’s becoming a tax hell.

These taxpayer costs are skyrocketing because the city’s auditors calculate that the police and fire pension funds will be completely depleted of funds in three to five years. The local Times-Tribune newspaper reported this week that “pensions increased by as much as 80 percent” after a court order in 2011 awarded millions of dollars in added pensions to firefighters and police officers.

This is a town that has already been struggling for years to pay its bills. The Times-Tribune reports: “The increased pensions come at a time when Scranton, in distressed status since 1992, is struggling to survive [and faces] a $20 million deficit.” City officials admit that paying these lucrative pensions will mean less money for schoolchildren, public safety and infrastructure needs.

Finances are so tight in this town that late last year the city auditor put out an advisory memo to city agencies that “Only in the event of an extreme emergency can a purchase be made . This is a serious matter and your cooperation is expected.” Now homeowners are getting squeezed on basic city services as they pay ever-escalating property taxes. What a deal. Don’t be surprised as more leave Scranton, further depleting the tax base. And who would want to move there now?

When the mayor requested that the unions help keep the city afloat by renegotiating the soaring pension costs, the answer from these militant “public service” union leaders was heck no.

One option is for Scranton to take the Detroit route and declare bankruptcy. This is also what several California cities, such Vallejo, have had to do.

The California Policy Center notes that this option has the virtue of “forcing the unions to renegotiate and take a hair cut.” If that doesn’t happen, cities like Scranton, and many more working-class towns, will continue to raise taxes at a time when families are already walking a financial tight rope.

The left loves to talk about “fairness” and “inequality,” but where the inequities really exist is in towns like Scranton. Middle-class private-sector workers pay higher and higher taxes to fund public-sector pensions that, as the Manhattan Institute has shown, are often twice as generous as what most workers will receive themselves. The money for supersized pensions isn’t going to come from millionaires and billionaires like Bill Gates or Warren Buffett. It is coming right out of the paychecks of working-class Americans.

The crisis isn’t going away. Nationwide, public-employee pensions are running between $1 trillion and $5 trillion in the red, depending on the rate of return expected on stocks and bonds. This could be the next housing bubble to burst. Some states such as Utah have smartly moved quickly to head off this crisis by closing down open-ended pensions and putting public-sector union members in 401(k) plans that won’t bankrupt the state or municipalities. The unions are fighting this reform everywhere.

If something isn’t done quickly, the crisis in Scranton will soon be coming to a town near you.