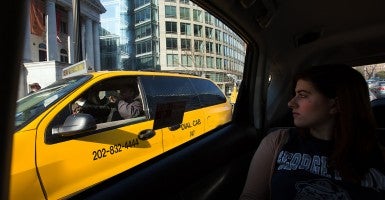 They don’t get it. Competition, that is. Or what being an entrepreneur means, for that matter.

The District of Columbia Taxicab Commission announced it will require all 7,000 taxis in the District to use an app that lets customers order a ride via their smartphones. Called Universal DC TaxiApp, it will be tested in spring 2015 and required sometime after that.

Some might say it’s about time. But is it? Should the Taxi Commission be enacting more regulations? No, it should do the exact opposite.

Government intervention like the commission’s TaxiApp proposal does not spur innovation; it stalls it. Free markets encourage innovation because they create a healthy environment for entrepreneurship and competition to thrive.

Commission spokesman Neville Waters says the app “is an attempt to level the playing field,’’ and that ‘‘It’s trying to respond to customer concerns and the evolving tastes out there.’’ In fact it’s a response to the success and market share that ride-sharing technology companies Uber and Lyft enjoy.

Uber, the most dominant ride-sharing company in the District, launched in December 2011. Setting aside the argument above, it still took the Taxi Commission three years to make this announcement that it will try to catch up.

Three years ago, Apple had just announced the iPhone 4S and Siri, Game of Thrones had just completed its first season and Taylor Swift was still singing country music.

Yes, things have changed in three years. Tastes have evolved.

To be fair, the commission has been busy. Busy requiring taxi drivers to install credit card readers, affix electronic signs announcing “Taxi for Hire” in place of the old dome lights and make other changes. All of this has come at the expense of individual drivers.

If District taxi drivers had faced fewer regulations in past few years (if not decades), many probably would have adopted credit card readers or otherwise made changes to enhance their business by now.

Drivers do not benefit from the commission telling them how to run their businesses or protecting them from competition; in fact, the commission’s coddling and coercion set back would-be entrepreneurial taxi drivers.

Right now, though, taxis are stuck with it. That means they will be playing catch-up until they’re granted more freedom. And it means companies, such as Uber, with innovative ideas and the technology to implement them, will lead the way.