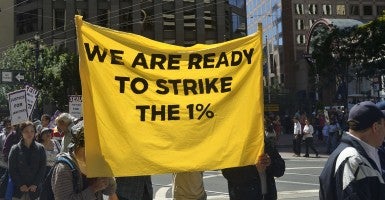 Many states and local governments are considering right-to-work laws. These laws make union dues voluntary. Without them, union contracts make paying dues a condition of employment.

While most Americans support the concept of right-to-work, unions argue strenuously against them. However, most of the arguments against right-to-work have little basis in fact.

Myth: Right-to-work laws allow nonunion members to “free ride” on the benefits of union representation without paying its cost.

In that case, the law requires unions to represent non-members fairly. They cannot negotiate high wages for their supporters and the minimum wage for non-members. Unions can avoid representing non-members by disclaiming exclusive representative status.

Fact: Unions often spend little on representational activities. When unions choose to act as exclusive bargaining representatives, they often spend relatively little on processing grievances and negotiating contracts. Often union contracts have employers cover these costs by allowing union stewards to do union business while on company time. As a result, many union locals spend very little representing workers – either members or non-members.

Fact: Companies consider right-to-work laws a major factor when deciding where to locate. Organizing victories bring in a lot more money for a union in jurisdictions with compulsory dues. Consequently, unions organize more aggressively in places without right-to-work laws.

Companies in turn want to know they can avoid being targeted by union organizers if they treat their workers well. Right-to-work laws make that more likely.

Economic development consultants report that roughly half of all major businesses refuse to consider locating in jurisdictions with compulsory dues. Bureau of Labor Statistics data show that between 1990 and 2014 total employment grew more than twice as fast in right-to-work states as in states with compulsory dues.