What Prenatal Tests Can’t Show Us 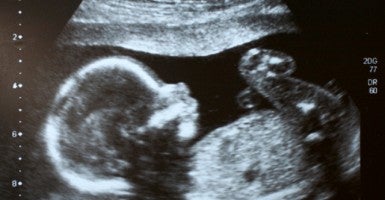 I knew what I wanted to see on my friend’s third test.

A friend of mine recently had her routine mammogram. Scarily, the results came back showing “something.”  The next step was to get an ultrasound mammogram that was a more definitive test.  It also came back “showing something.”

The next step was a biopsy.

I was with her for the ultrasound and on the day she had the biopsy.  After the biopsy, she had to wait for the result for five very long days.

Anyone who has been through something similar knows the fear that immediately sets in. I’d heard the statistic that seven in eight American women will never get breast cancer. But in those days of waiting, I was focused on that number that says one in eight, at some point in their lifetime, will.

And it proved that not all medical screenings or tests are definitive.  My friend’s first two tests showed “something” but the third, more reliable, test showed she was just fine.

Sadly, unlike my friend going through a mammogram scare, many pregnant women today having prenatal screenings aren’t going through the full battery of tests to see if the “something” they are worried about – most often Down Syndrome or abnormalities that could cause the baby’s death shortly after birth – is actually reality.

According to a recent story by the New England Center for Investigative Reporting, prenatal testing is not nearly as accurate as many believe:

Two recent industry-funded studies show that test results indicating a fetus is at high risk for a chromosomal condition can be a false alarm half of the time. And the rate of false alarms goes up the more rare the condition.

That’s right, a positive test in a prenatal screening is by no means a certainty that the unborn baby has any genetic abnormalities.

In a study by one provider of such medical tests, they found that among older mothers a prenatal test indicating the unborn baby would be born with Edwards syndrome was accurate only 64 percent of the time.

There is currently no national statistic of how many American women choose to abort their babies without having further diagnostic testing, but individual studies indicate significant numbers of women do.

But the scariest thing about prenatal testing isn’t that it’s wrong more often than we thought, or that some women and couples are aborting babies that, despite what the tests said, are completely healthy and “normal.”  The most troubling part is that we would prematurely end the life of a child at all.

Just because a child may have health or mental issues that will prevent him or her from living the life we imagined and hoped for them is not a reason to prevent them from being born.  To follow that line of thinking to its logical conclusion, there are plenty of people in our society today that would be deemed unworthy to live due to an illness or their age or mental capacity.

When society approves the aborting of an unborn child because he or she has Down Syndrome, what does that say about the worth society places on those people who have Down Syndrome and are living among us today?

The Charlotte Lozier Institute produced a very interesting report earlier this year on the state of those living with Down syndrome. While a cure for Down syndrome may not be possible, medical advances have improved life expectancy today to over 60 years of age and promising clinical trials are under way to improve cognition, memory and speech for those living with Downs.

Additionally, the vast majority of people with Down syndrome say they are happy with their lives– one study reported that 99 percent were.  And yet, despite that fact and all the medical advances, abortion rates in the U.S. following a confirmed prenatal diagnosis range from 61 to 93 percent.

I’m not opposed to prenatal tests.

The more parents can know about their unborn child in advance the better they can be prepared – whether it is something as trivial as having the nursery painted blue because they know it’s a boy or something far more serious such as a medical condition they can treat in advance or be better prepared for once the baby is born.

But the use of such tests for “life and death” choices is not the sign of an advanced society.  It’s a sign we’ve become less tolerant of differences and less tolerant of all those with disabilities.