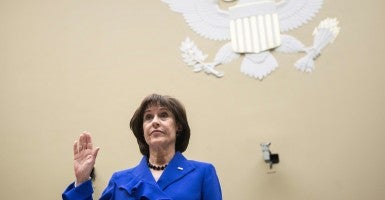 The nation’s tax chief decided not to tell Congress that the IRS was targeting conservative groups, an action that would have brought to light the misconduct before the 2012 election, according to a new report from a House oversight panel.

The implication, critics say, is that his failure to act protected President Obama from facing difficult questions in a tough re-election campaign against Republican Mitt Romney.

Nineteen months after the Internal Revenue Service’s initial acknowledgement that it applied unusual scrutiny to tea party and other conservative groups, the House Oversight and Government Reform Committee is out with more findings from its investigation.

Although the report concludes that the IRS tarnished its reputation for evenhandedness, here is the headline finding: Then-IRS Commissioner Steven Miller considered telling Congress about his agency’s targeting practices a year before details first went public in May 2013.

Released today, the report chronicles the House oversight panel’s probe of the IRS scandal, including the actions of Lois Lerner, a key official who resigned and refused to testify before Congress. Covering four years at the tax agency, the Republican-led committee’s 226-page report brings to light new findings and draws new attention to discoveries already made public. The report states:

The Internal Revenue Service has compromised its traditional position as an independent tax administrator. The IRS’s inability to keep politics out of objective decisions about interpretation of the tax code damaged its primary function: an apolitical tax collector that Americans can trust to treat them fairly.

“The IRS’s inability to keep politics out of objective decisions about interpretation of the tax code damaged its primary function,” says a new @GOPOversight report.

The oversight panel, with Chairman Darrell Issa, R-Calif., at the helm, looked into the IRS targeting scandal for more than a year. Rep. Jason Chaffetz, R-Utah, will take over as chairman in January.

Many of the targeted groups sought to educate fellow Americans about what they considered key issues in the 2010 and 2012 elections.

The committee sought to determine whether Lerner,  who soon resigned as head of the IRS division overseeing tax-exempt organizations, acted independently in holding up applications from conservative groups or did so on orders from the White House.

Rep. Elijah Cummings of Maryland, the committee’s top Democrat, said Republican staff who prepared the report deliberately kept information from lawmakers on the other side of the aisle.

“It’s revealing that the Republicans — yet again — are leaking cherry-picked excerpts of documents to support their preconceived political narrative without allowing committee members to even see their conclusions or vote on them first,” Cummings said in a prepared statement:

By leaking information to reporters on condition that they not disclose it to Democrats, Republicans are intentionally bypassing the normal congressional vetting process designed to distinguish fact from fiction.

For anyone who mistakenly believed that IRS officials were just misinterpreting the law when they targeted conservative organizations, this latest report lays to rest any doubts that IRS bureaucrats were engaging in political reprisals. This type of abuse by a powerful agency like the IRS should terrify Americans.

Four new findings in the report:

1. Steven Miller, then IRS commissioner, thought about telling lawmakers about the IRS targeting in 2012.

In an email to his chief of staff, Nikole Flax, sent in June 2012 — nearly five months before the presidential election —  Miller considers telling Rep. Charles Boustany, R-La., and the House Ways and Means Subcommittee on Oversight about his agency’s targeting of conservative groups applying for tax-exempt status.

When he testified before the subcommittee one month later, however, Miller never mentioned the actions. 2. The Department of Justice explored working with the IRS to prosecute tax-exempt groups.

Justice and IRS officials met in 2010. Three years later, Lerner told Flax she had received a phone call from a Justice official about working together to pursue organizations that “lied” on applications. In an email, tax law specialist Hilary Goehousen addresses concerns from an IRS agent in Cincinnati about how to deny an organization tax-exempt status.

Goehousen told the agent she would look into it but noted that the applicant sounded like a “bad org” that gave her an “icky feeling.” 4.   Investigators heard “conflicting” accounts of whether the White House knew about the targeting.

The House oversight panel sought to determine whether Lerner acted independently or received orders from the White House.

The report contends that Lerner and other IRS officials allowed politics to “seep into their work,” and that senior officials who learned of the improper targeting attempted to manage rather than correct it.

Although senior IRS officials knew, the report says, “accounts about whether Obama administration officials outside the IRS were told of targeting before the 2012 election are conflicting.”

The committee will continue to investigate, the report says. Read it below.