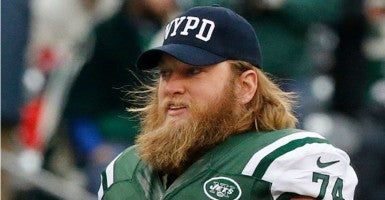 Mangold, a center for the Jets, sported a black NYPD baseball cap yesterday while walking into Metlife Stadium. The five-time Pro Bowler’s gesture followed the deaths of officers Wenjian Liu and Rafael Ramos in an execution-style shooting as they sat in their patrol car working overtime in Brooklyn.

Wearing an NYPD hat, @nickmangold walks into the stadium. pic.twitter.com/dcsVTGz9jr

Coughlin, a two-time Super Bowl winner, displayed a more subtle tribute to the slain police officers during the Giants’ away game against the St. Louis Rams.

Tom Coughlin wearing a black strip on left shoulder and peace sign under NY in honor of #NYPD officers Liu and Ramos pic.twitter.com/yr6tshDCTr

“We wore this because the New York Giants wanted to honor and mourn the assassination of the two New York City policemen that took place last night in our city,” Coughlin said after the game:

We also wanted to wear this pin to represent peace. Let’s hope that the voice of reason can prevail. Violence never solves anything. I realize there are issues, but solve them with nonviolent means.

Police said the shooter, identified as Ismaaiyl Brinsley, killed the officers to exact “revenge” on law enforcement following the deaths of Michael Brown of Ferguson, Mo., and Eric Garner of Staten Island, N.Y., in confrontations with police. Both men were black and unarmed; grand juries declined to bring charges in either case.

Mangold told Yahoo Sports that after he heard about the shooting, he reached out to a friend with connections in the NYPD to get the cap.

Every one of those [police officers] that’s out there, they risk their lives every day. They go out there to keep the community safe, and for that to happen to those two guys, their families, that’s a raw deal.

“For that to happen to those two guys, their families, that’s a raw deal,” says New York Jets center @NickMangold.

Mangold’s statement came just weeks after five St. Louis Rams players made the “hands up, don’t shoot” gesture to protest Brown’s death before a Nov. 30 game. The players faced some backlash for their actions, and reports differ as to whether or not the team apologized.

When asked if he feared a similar response to his gesture, Mangold said he hadn’t thought about it.

“It didn’t cross my mind. Even if there was backlash, those families deserve support,” Mangold told Yahoo Sports. “I would have been happy to take it. I just wanted to do something to support them.”

Mangold’s salute to the NYPD earned him praise from 2012 Republican presidential nominee Mitt Romney, whom the player supported in that campaign.

Solidarity with @nickmangold in his salute for those in blue.