How Much Was Misspent on Food Stamps in 2014 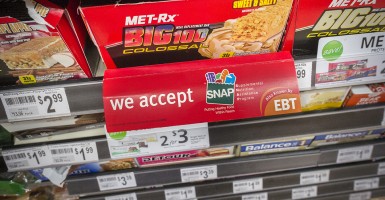 This year the U.S. Department of Agriculture misspent $2.4 billion on food stamps, according to a November report from the USDA Office of Inspector General.

“Misspending” means the USDA gave a household either more or less food stamp benefits than it should have received. Historical data shows most misspending results in overpayments.

Part of the increase in spending can be traced to the recession, but a lot is related to policies that have made it easier for people to get on food stamps and remain there. Even as the economy improves, the cost of the food stamps program is projected to remain near record levels.

As the Heritage Foundation’s 2014 Index of Culture and Opportunity shows, food stamp participation has skyrocketed. In 1970, less than 10 million people received food stamps. Three decades later it was around 20 million. Today, close to 50 million Americans are on the program.

The food stamps program is in need of reform. First and foremost, policymakers should focus on promoting work. As Heritage’s Robert Rector and Katherine Bradley explain:

Food stamps should be transformed from an open-ended entitlement program that gives one-way handouts into a work activation program. Non-elderly, able-bodied adults who receive benefits should be required to work, prepare for work or at least look for work as a condition of receiving aid.

Welfare programs should be based on sound principles. Americans are willing to help those in need, but they also believe that people must do what they can for themselves. Policymakers should pursue welfare reform that encourages self-sufficiency. Reforming food stamps to include a work requirement is a good step forward.