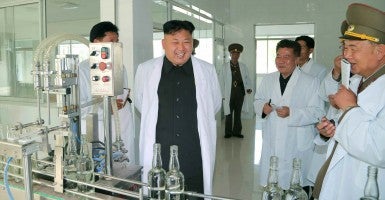 Myth 1. The U.S. and other nations face a policy choice between sanctions or engagement

All instruments of national power should be used simultaneously in conjunction with each other as part of a comprehensive, integrated strategy. No tool is meant to be used in isolation, so statements such as “Sanctions by themselves won’t be effective” and “Sanctions are not a silver bullet” reflect a misunderstanding of the requisite broader policy strategy.

>>> Who Might Be Behind the Internet Outage in North Korea

When debating the efficacy of sanctions, it is important to recognize that diplomatic engagement has failed to curtail North Korea’s two nuclear programs. Pyongyang violated each of the four international agreements it signed to never pursue nuclear weapons programs. Four subsequent agreements to abandon the weapons it promised never to build also collapsed. Over a 20-year period, the international community has pursued two-party, three-party, four-party and six-party negotiations – all have failed.

Myth 2. Sanctions can’t affect an isolated country like North Korea
Even the most reclusive regime, criminal organization or terrorist group is tied to the global financial order. Dirty money eventually flows across borders and – given that the U.S. dollar serves as the global reserve currency –95 percent of all international financial transactions are denominated in dollars. As such, virtually all international transactions must pass through a U.S. Treasury Department-controlled bank account in the United States.

For banks and businesses, there are catastrophic risks to facilitating – even unknowingly – illicit transactions. The British bank HSBC was fined $1.9 billion for money-laundering and sanctions violations, including financial dealings with Iran, and French Bank BNP Paribas was fined $8.97 billion for processing banned transactions with Sudan, Iran and Cuba.

Beyond having to pay fines and having assets frozen or seized, financial institutions can be denied access to the U.S. financial system – and thus shunned internationally as a pariah – if labeled as a “money-laundering concern.”

Nor has Washington designated North Korea as a primary money-laundering concern as it did Iran and Burma. The U.S. has targeted Zimbabwe, Congo, and Burma for human rights violations, but it has yet to take any action against North Korea 10 months after the UN Commission of Inquiry accused Pyongyang of human rights violations so egregious as to qualify as crimes against humanity.

Myth 4. There is nothing more the U.S. can impose on North Korea
The U.S. has pursued a policy in which it incrementally increases punishments on Pyongyang for its repeated defiance of the international community. Responding to indications of an impending fourth North Korean nuclear test, President Obama declared the U.S. would consider “further sanctions that have even more bite.”

Former Assistant Secretary of State Kurt Campbell commented, “I thought North Korea was the most sanctioned country in the world, but I was (proven) wrong….Myanmar is sanctioned about 10 times (more than) North Korea.…It would be possible for us to put more financial pressure on North Korea…We can make life much more difficult through financial sanctions on North Korea.”

Myth 5. Sanctions don’t work against North Korea
Tougher measures were effective when applied. In 2005, the U.S. designated a Macau-based bank as a money-laundering concern for facilitating North Korean illicit activities. North Korea was shunned by the international financial system because of the cumulative effect of the action, the clear signal that Washington would belatedly begin enforcing its laws, and a series of private meetings by U.S. officials throughout Asia.

Undersecretary of Treasury Stuart Levey stated that, “Two dozen financial institutions voluntarily cut back or terminated their business with North Korea, including institutions in China, Japan, Vietnam, Mongolia and Singapore.” A North Korean negotiator admitted to a senior White House official, “You finally found a way to hurt us.” Years later, Obama administration officials declared that the Banco Delta Asia action was “very effective” and it was “a mistake” for the Bush administration to have rescinded it.

Myth 6. China would never go along with targeted financial measures
China has shown itself to be part of the problem rather than part of the solution by turning a blind eye to North Korean proliferation crossing China and not fully implementing U.N. measures. But, as former Treasury Department official Juan Zarate commented in his book “Treasury’s War,” the U.S. action on Banco Delta Asia compelled Chinese banks to make a choice—appear legitimate by scrutinizing North Korean illicit financial activity in their banks or risk becoming a financial rogue and losing access to the U.S. financial system.

As Zarate points out, it became apparent that Chinese financial entities could be persuaded to follow the U.S. Treasury’s lead and act against their government’s own stated foreign policy and political interests.

Both the United Nations and the United States have warned that North Korea’s escalating nuclear and missile capabilities are a “clear threat to international peace and security.” Yet, both have pursued a policy of timid incrementalism in applying targeted financial measures.

This raises the question as to why does the United States hesitate to impose the same measures on North Korea that Washington already has implemented on other countries for far less egregious violations?

Originally published by the Center for Strategic and International Studies’ Korea Chair Platform.