The Reasons Behind Obama’s Failures 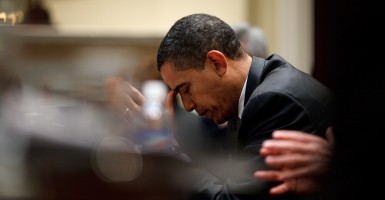 In early October, President Obama warned his supporters to “make no mistake: these policies [of mine] are on the ballot. Every single one of them.” After the November elections, he probably wishes he hadn’t said that. The scale of the liberal defeat is remarkable, as are its causes.

But the underlying reasons for Obama’s failure run deeper than the normal swings of the political pendulum. Four of them are vital. The first is that a good part of Obama’s appeal in 2008 was that he was supposedly above politics. He was compared to Abraham Lincoln, a canny politician we now misremember as being above the partisan fray.

This was nonsense. If you want to get anywhere in politics, you have to be a politician. And the essence of politics has not changed since Aristotle’s time. That doesn’t mean that politicians are all liars. But it does mean that anyone who looks for salvation in a politician is going to be disappointed. Obama was hyped so high in 2008 that he had nowhere to go but down.

Another reason for Obama’s failure was that he sought, in his words, to begin “the work of remaking America.” The entire American political system was designed by the Founding Fathers to frustrate his plans. The Constitution, with its checks and balances and its separation of powers, was intended to limit the government and prevent transient majorities from having their way.

Within those limits, Obama has actually – and from a conservative perspective, regrettably – done a lot: Obamacare itself is proof of that. But inevitably, having set out to, as he claimed, fundamentally transform the United States, Obama has come up short. He has increasingly resorted to unilateral executive actions precisely because he resents the system’s constraints, but that just feeds the narrative that he’s more emperor than president.

The third reason for Obama’s failure is that most of his ideas were wrong. There were no shovel-ready jobs waiting for the stimulus spending. Fixing health care did not require ripping apart the insurance market. The answer to a weak economy was not expensive green energy.

Iran was not waiting for an outstretched hand of friendship. Russia wanted a reset for malicious reasons of its own, not because it wanted to be our friend. Al-Qaida was not on the run. The Arab Spring was not a new democratic dawn. The European Union was not a force for prosperity. Israel was not the reason the Middle East is so troubled.

Everyone makes mistakes. But it’s hard to bounce back from so many fundamental errors, especially when – and this was Obama’s fourth error – the administration has been terrible at the boring business of being competent.

The fiasco of Obamacare was bad enough. But then there was the Veterans Administration scandal, the Secret Service’s prostitute parties, the Internal Revenue Service targeting of conservative groups, Ebola and the Justice Department’s gun-running into Mexico, to name only a few of the screw-ups that have tainted the administration.

We should never attribute to malice what can plausibly be explained by incompetence. And conservatives aren’t shocked when governments make mistakes: It’s what we expect them to do. But incompetence wears more heavily on liberals, because they are the ones who always want government to do more. The evidence is overwhelming that government can’t do it well.

Obama came into office wanting, in his words, to make government cool again. But as respected U.S. political analyst Michael Barone points out, since Watergate and with the exception of the 9/11 aftermath, trust in government peaked under Ronald Reagan, precisely because Reagan sought to limit government. Under Obama, it has fallen to near-historic lows.

The conservative triumphs in 2010 and 2014 have not irrevocably set America’s destiny: there are no permanent victories in politics. But there was a fundamental contradiction between the apolitical fantasy that Obama embodied and the real-world desire of the American people to support liberal policies, especially when incompetently administered.

Once the fantasy wore off, reality set in. And for liberals, reality is often bad news.