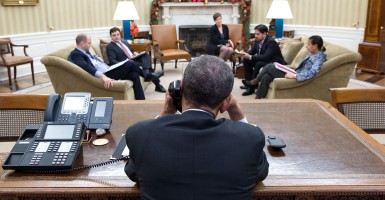 Why did President Obama go for broke on Cuba, announcing the United States would normalize relations with that repressive regime? The answer appears in his statement to the nation. There, the president not only made clear that this change has been on his bucket list for some time, but also that his knowledge of Cuba comes straight out of the international Left’s playbook.

“When I came into office, I promised to re-examine our Cuba policy,” Obama said, proving once again that last month’s midterm shellacking seems to have had an odd effect on our president. Rather than make him humble, rejection at the polls has liberated him to do all the things he wants in his “legacy.”

His rationale for acting was instructive, too. In essence, for 15 minutes Obama reeled off a list of talking points one could hear anywhere from the Left Bank of the River Seine to, say, any dusty classroom in Cuba. The only thing missing was the picture of Che so omnipresent in Paris or Havana. The image his platitudes sought to create was the following: The embargo, not Communism’s internal insanity, has left Cuba a pauperized police state; our relations have been frozen by ideology, not principles or national interests; and the United States used to be Cuba’s colonial power.

Now, the one thing all these views have in common is that they are A, untrue, and B, favorite talking points of the international Left.

Obama: “I was born in 1961, just over two years after Fidel Castro took power in Cuba and just a few months after the Bay of Pigs invasion, which tried to overthrow his regime. Over the next several decades, the relationship between our countries played out against the Cold War and America’s steadfast opposition to communism. We are separated by just over 90 miles. But year after year, an ideological and economic barrier hardened between the two countries.”

The Castros are still in power not because of the embargo, but because they practice state terror.

Reality: The remarkable aspect of this is that for 55 years one man, with help from his brother, has imposed Communist repression on the Cuban people, plunging them into economic penury while perfecting a police state. The United States was simply reacting to the theft of its property and the affront to its principles. In the Bay of Pigs, it was Cubans who invaded their island. Gone unsaid is that Cuba played host to nuclear missiles aimed at America (see: Cuban Missile Crisis).

Obama: “Today, Cuba is still governed by the Castros and the Communist Party that came to power a half-century ago. Neither the American nor Cuban people are well served by a rigid policy that’s rooted in events that took place before most of us were born.”

Reality: The policy is not rooted in the Bay of Pigs, or the Missile Crisis, for that matter. It is rooted in the beatings and imprisonment that Cuban dissidents receive today and the affront to our values that human rights being trampled 90 miles away represents. The Castros are still in power not because of the embargo, but because they practice state terror.

Obama: “To the Cuban people, America extends a hand of friendship. Some of you have looked to us as a source of hope, and we will continue to shine a light of freedom. Others have seen us as a former colonizer intent on controlling your future … Let us leave behind the legacy of both colonization and communism.”

Reality: Nobody in Cuba sees the United States as a former colonizer, namely because the United States never colonized Cuba. Only the communist regime speaks in these terms to the 11 million Cubans it tries (unsuccessfully) to indoctrinate. The United States, much to its credit, came to the aid of Cubans in 1898 after they had spent more than three decades in an on-again, off-again protracted war with Spain. After dispatching Spain in a matter of weeks, the United States said right from the beginning that Cuba would become independent, which it did only four years later.

The United States Did Not Colonize Cuba

Three of my great-grandfathers fought in this war, on both sides (the fourth had not yet arrived from Spain). I grew up with a grandmother who was seven years old when the war ended. My house, in other words, resonated with talk of the war and the U.S. occupation 60 years later. The consensus was that there was no way Cubans would have been free from Spain if the United States had not entered on the side of the Cubans.

Sure, the United States played a large role in Cuba until the Castro takeover in 1959. These were the results: In 1957, Cuba had the lowest infant mortality rate in all of Latin America, and 13th-lowest in the world. It now has dropped to 25th in the world. In the pre-revolutionary era, Cuba was third in all of Latin America in terms of caloric intake. It now ranks last in per capita daily caloric intake.

In the 1950s, Cubans had 58 newspapers to choose from; only four other countries in Latin America had more. By 1994, the print media had decreased to only 17; all are controlled by the Cuban government.

In other words, President Obama could have been proud of the role that the United States has played in Cuba, from 1898 to the present. Instead, he chose to spout the clichés of the internationalist Left and to curry their favor by recognizing Raul Castro.