Obama’s Theme for the New Year: ‘We Can’t Be Stopped’ 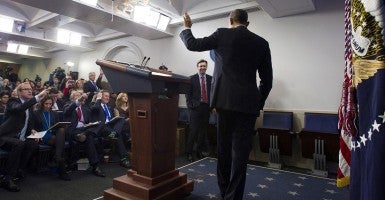 Obama confirmed that North Korea was behind the hack attack on Sony Pictures at DEc. 19 presser. (Photo: Kevin Dietsch/Newscom)

A relaxed President Obama held a year-end press conference this afternoon, where he reflected on his first six years in office and looked ahead to the last quarter of his presidency.

In a brief prepared statement and then a lengthy question-and-answer session, Obama weighed in on issues such as the U.S. economy, relations with Congress, Ferguson, his recent deal with Cuba and Sony’s decision to cancel the release of a movie because of a cyber attack from North Korea.

He also revealed his theme for the new year.

“My theme for the end of the year is that we have gone through difficult times, but through persistence and effort and faith in the American people, things get better,” Obama said.

“Part of what I hope as I reflect on the new year is that this should generate some confidence. America knows how to solve problems. When we work together, we can’t be stopped.”

Below, The Daily Signal highlights some of Obama’s comments on the issues of today — and tomorrow.

Obama, on Sony’s decision to cancel the release of “The Interview” (the FBI confirmed that North Korea did, in fact, carry out a cyber attack on Sony):

“I am sympathetic to the concerns they faced, but having said that, yes, I think they made a mistake. I wish they had spoken to me first. I would have told them don’t get into a pattern where you’re intimidated by these kinds of criminal attacks.

“I think they made a mistake,” President Obama said of Sony’s decision to pull “The Interview” from theaters.

“We can’t have a society where some dicator some place can impose censorship in the U.S. It says something interesting about North Korea that it decided to have the state mount an all-out assault on a satirical movie starring Seth Rogen and James Flacco (he meant James Franco).

“I hope Congress will work with us on creating strong cyber security laws that allow for information sharing in the private and public sector, so we can incorporate best practices and prevent these attacks.”

On relations with the new Republican-controlled Congress in 2015:

“I am sincere when I say I want to work with the new Congress to get things done to make sure government is better and smarter. We saw during the lame duck that perhaps a spirit of compromise may be coming to the fore. I take Speaker Boehner and Majority Leader McConnell at their word.”

Speaker of the House John Boehner listens to a question as he holds a news conference on the omnibus spending bill. (Photo: Bill Clark/CQ Roll Call)

On his use of executive actions:

“I am energized and excited and I won’t be stopping for a minute in an effort to make life better for ordinary Americans. Interesting stuff happens in the fourth quarter.

“I am not persuaded by the argument that if I didn’t take executive action they [Congress] would be more productive. There is no evidence of that. Where I see a big problem and opportunity to help the American people, and I am within lawful authority to do it, I will do it.”

On his deal to normalize relations with Cuba:

“I don’t anticipate overnight changes. I think this will happen in fits and starts. But what I know deep in my bones is that if you’ve done the same thing for 50 years and nothing’s changed, you should try something different if you want a different outcome.

“The more Cuban people can see what is possible, the more interested they will be in change. The whole point of normalizing relations is that it gives us a greater opportunity to have influence with that government than not.”

On the Keystone pipeline (incoming Senate Majority Leader Mitch McConnell has said this will be Congress’ first order of business):

“There has been a tendency to hype this thing as some magic formula for what ails the economy. It’s hard to see where they get that info from.”

On the state of black America:

“Like the rest of America, black America in the aggregate is better off than when I came into office. How we’re thinking about race relations has been colored by Ferguson and the [Eric] Garner case.

“There are some really concrete and practical things that police departments and agencies can implement now to rebuild trust between communities of color and police departments There is an opportunity for all of us to come together and take a practical approach to these problems.”