Marco Rubio, Rand Paul Duke It Out Over Cuba Policy 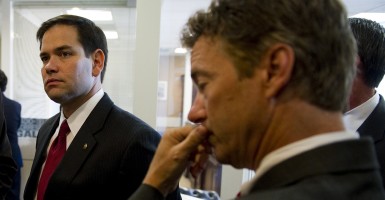 The Florida senator, whose parents came to America from Cuba, told Megyn Kelly last night that Paul “has no idea what he’s talking about” regarding Cuba.

Rubio was referring to Paul’s interview with News Talk 800 where he criticized the 50-year embargo, saying it “just hasn’t worked.”

“If the goal was regime change, it sure doesn’t seem to be working,” Paul said. “Probably, it punishes the people more than the regime because the regime can blame the embargo for hardship.”

Rubio told Kelly he “would expect that people would understand that if they just took a moment to analyze that, they would realize that the embargo is not what’s hurting the Cuban people, it’s the lack of freedom and the lack of competent leaders.”

The Kentucky senator swung back today, taking to social media to lambaste his Republican colleague.

Hey @marcorubio if the embargo doesn't hurt Cuba, why do you want to keep it?

The United States trades and engages with other communist nations, such as China and Vietnam. So @marcorubio why not Cuba?

.@marcorubio what about the majority of Cuban-Americans who now support normalizing relations between our countries? http://t.co/0qhSOeD9Va