Why We Isolated Cuba for 53 Years 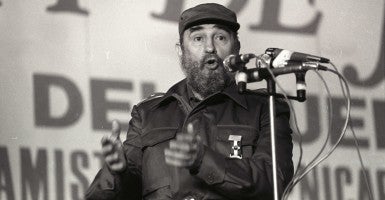 Contrary to what President Obama has asserted, U.S. sanctions have worked. Communist Cuba is so economically weak it cannot export Marxism-Leninism as in the past, and pro-democracy advocates have become emboldened.

For more than five decades, presidents, Democratic and Republican, politically isolated and economically sanctioned Communist Cuba for the best of reasons. Here are four of them:

As The Washington Post editorialized, President Obama pledged to lift economic sanctions and establish diplomatic relations at the precise moment when Venezuela’s economic miseries seriously threatened its huge billion-dollar subsidies of Cuba and when more and more Cubans were pressuring the Castro regime to allow fundamental human freedoms.

The Castro regime was on the ropes, but in the words of Cuban dissident Yoani Sanchez, “Castroism has won.” Today, Fidel must be smiling and lighting up a large El Rey del Mondo cigar in his Havana palace.