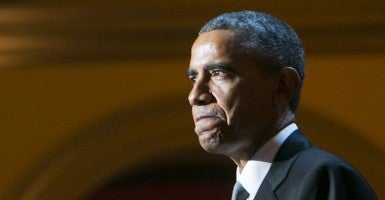 On Tuesday, in United States v. Juarez-Escobar, a federal district court in Pennsylvania held that President Obama’s Nov. 20 executive action on immigration, which affects millions of illegal aliens currently in the United States, violates the U.S. Constitution’s separation of powers.

In April, Juarez-Escobar, accompanied by a minor, drove around a traffic stop with a blood alcohol level of 0.18 percent and open beer cans in the vehicle. He was subsequently charged with drunk driving and corrupting a minor, and his immigration status was referred to the Department of Homeland Security in June. He was jailed in July.

In an October hearing before a U.S. magistrate judge, Juarez-Escobar pled guilty to having illegally re-entered the United States. On Nov. 24, prior to sentencing, the supervising federal judge requested counsel for the government and the defendant to address the question of whether the president’s executive action applied to this defendant and whether any additional statutory or constitutional considerations needed to be addressed.

The government contended the executive action applied only to civil immigration enforcement and thus did not cover this criminal prosecution. Counsel for Juarez-Escobar argued, among other things, that certain Honduran citizens in the U.S. were entitled to have their deportation deferred because of turmoil in their country.

According to the judge, the executive action in effect is legislation and therefore violates the constitutional separation of powers.

District Court Judge Arthur J. Schwab first addressed constitutional issues. He found that the executive action, which was implemented through the secretary of homeland security, announced two different enforcement policies: (1) expansion of deferred action to certain categories of illegal immigrants; and (2) updating of removal and deportation priorities for certain categories of illegal aliens.

The court determined that the executive action goes beyond the allowable exercise of prosecutorial discretion in two respects. First, it provides for a systematic and rigid process by which certain individuals will be treated differently than others based on arbitrary classifications (not case-by-case determinations). Second, it confers substantive rights on illegal immigrants who fall within broad categories created by the executive action.

For these reasons, according to the judge, the executive action in effect is legislation and therefore violates the constitutional separation of powers (Congress, not the president, legislates) and the president’s constitutional duty to take care that the laws be faithfully executed.

In short, the court did not order the administration to stop implementing the executive action.

Notably, the court fully rejected the government’s argument that President Obama’s executive action applies only to civil deportation proceedings, not criminal proceedings. As Judge Schwab pointed out, civil deportation proceedings often arise “after – or as a result of – the individual being convicted of a crime.” As the judge said, the court could not “ignore the fact that what happens here, in this criminal proceeding, significantly and determinatively impacts what happens there, in a civil proceeding.”

This decision in Pennsylvania will not directly affect a separate federal lawsuit filed initially by 17 states (six additional states have since joined the suit) in Texas against the president’s amnesty plan for illegal aliens, embodied in the executive action.

On Dec. 4, the states filed a motion for a preliminary injunction requesting that the court order the administration to stop implementing the immigration plan. The states requested a hearing “by Dec. 31, 2014, or as soon as practicable thereafter.” We do not yet know whether the Texas court will hold a hearing by Dec. 31, but the states are clearly trying to press the court to act as quickly as possible on their lawsuit.