How ‘Grey’s Anatomy’ Just Elevated the Value of Life 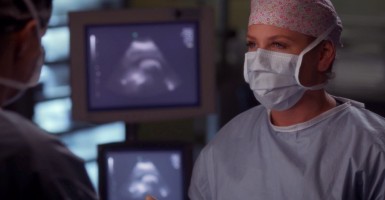 It’s one of the longest-running, popular dramatic televisions shows of all time.

“Grey’s Anatomy” has been a cultural staple in the lives of millennials for the past 10 years. Many of us feel like we’ve grown up with Meredith Grey, McDreamy and friends—and the show has had some truly unbelievable story lines over the years.

And now, the show’s writers took on a real-life emerging medical procedure—fetal surgery.

In a country where it’s legal to end that life without consequence, fetal surgery raises an uncomfortable reality for supporters of abortion.

It’s a rare but increasing practice that is saving the lives of babies with birth defects such as spina bifida and brain tumors—while still inside their mother’s womb.

There is an underlying message in any conversation about human life before birth. That is the intrinsic value of life at all stages, including the tiniest of humans just trying to make it through pregnancy.

In a country where it’s legal to end that life without consequence, fetal surgery raises an uncomfortable reality for supporters of abortion.

It’s intriguing that “Grey’s Anatomy” chose to highlight this issue in the show’s last season, especially at a time when Americans’ views on life are shifting.

As medical science and procedures before birth become more sophisticated, it will naturally become more difficult for people to argue in favor of elective abortion as an ethically acceptable option.

At what point does a fetus gain the value of a life worth saving? It’s legal to abort babies in the United States at the same age they can undergo life-saving fetal surgeries. The double standard is glaring. The writers for “Grey’s Anatomy” may not realize that highlighting the fascinating miracle of fetal surgery is in direct contrast with previous storylines they’ve run—specifically when Dr. Cristina Yang chose to abort her perfectly healthy child.

The episode when Yang goes through with the abortion was lauded by pro-choicers in the media as a victory—some even chastised the show for not making the abortion seem “guilt-free.”

Why don’t TV shows play out this medically legal “procedure” on air more often? Why is it so taboo to show a character making such a choice?

We know why—so much so that it doesn’t even need further explanation.

Fetal surgery, whether “Grey’s Anatomy” or surgeons intend it, is giving unborn babies the voice they wouldn’t otherwise have.

Life begins before we even know it exists within us—it’s a scientific reality. And that’s why fetal surgery is so amazing. It doesn’t save a life before it begins. It saves a life. Period.

Fetal surgery, whether “Grey’s Anatomy” or surgeons intend it, is giving unborn babies the voice they wouldn’t otherwise have. It’s their chance to be heard and show the world that life’s value isn’t determined by circumstance or emotion but by it’s inherent existence alone.

Correction: An earlier version of this article incorrectly stated this was the final season of “Grey’s Anatomy.”