In These 13 States, Gas Is Selling for Below $2 a Gallon 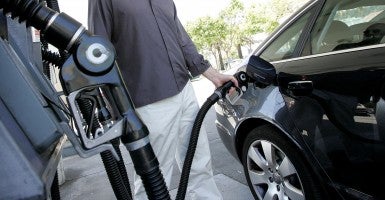 Just two weeks ago, a sole gas station in Oklahoma swept headlines for dropping gas prices below $2 a gallon. Today, 13 states have joined that list, and the trend is expanding.

Gas for less than $1.90 a gallon can be found in at least one station in Oklahoma, Louisiana and Ohio, according to CNN. CNN cites 10 additional states– Alabama, Arizona, Colorado, Indiana, Mississippi, Missouri, Nebraska, New Mexico, Texas and Virginia– that now have gas below $2 a gallon.

“What we’re seeing is markets at work,” Heritage Foundation economist Nick Loris said. “Significant increases in supply and a relatively weak demand is lowering prices not just at the pump, but for most of the goods and services we pay for.”

The national average has dipped to $2.55 a gallon, marking the lowest drop since October 2009, according to AAA’s Fuel Gauge Report. Just a year ago, that average was $3.23.

“Oil prices are plunging because there is so much oil in the market,” AAA spokesman Mark Jenkins said in a press release. “It’s unclear exactly how long this will continue, but gas prices will keep falling as long as oil prices do.”

Jenkins said oil prices are predicted to continue dropping through the first half of next year, increasing the “likelihood of $2 gasoline.”

CNN partially attributes this drop in prices to decreased oil demand because of the “economic slowdowns” across Europe and Asia along with increasingly fuel-efficient vehicles.

Another key reason for the drop is the increase in U.S. output. Domestic oil production is at a three-decade high, contributing to the increase in supply and driving down costs.

But Loris cautions against celebrating too soon.

“The falling prices are certainly a welcome relief,” he said. “But that doesn’t mean policymakers should ignore the government-imposed regulations and restrictions that artificially inflate prices and prevent markets from working more efficiently.”