If Fetal Surgery Can Save the Life of an Unborn Child, Why Do Some Oppose It? 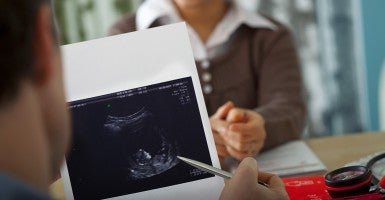 Roughly 3 percent of babies born each year in the United States suffer from a complex birth defect, according to the Children’s Hospital of Philadelphia.

That number is lower than it would have been without the work of Dr. Michael Harrison, who pioneered maternal-fetal medicine and performed the world’s first open fetal surgery at the University of California, San Francisco, Children’s Hospital in 1981.

The innovative procedure enabled physicians to address developing or existing defects that previously had been limited to postnatal treatment.

But although prenatal surgery can minimize the severity of neurological damage and physical abnormalities in unborn babies, some question the ethics of these procedures since most introduce risks to the life and future fertility of pregnant mothers.

According to Arizona State University’s Center for Biology and Society, women who consent to fetal surgery become increasingly at risk of premature labor, hemorrhage, scarring of the uterus, organ damage and difficulty conceiving in the future.

“Working to save and heal unborn children in utero testifies to the dignity of both mother and child,” says The Heritage Foundation’s Sarah Torre.

In 1990, the D.C. Court of Appeals ruled in In Re A.C. that a forced caesarean section violated a woman’s right to make health care decisions for herself and her fetus, granting women in the United States significant medical autonomy throughout their pregnancies. This autonomy has engendered ongoing ethical dilemmas.

“When a fetus requires specialized medical attention, that fetus is elevated to a new medical status as a patient, the interests of which may conflict with those of the pregnant woman,” says Kathleen O’Connor, author of the “Ethics of Fetal Surgery.”

According to O’Connor, “The relationship between the pregnant woman and fetus offers a clinically complex situation for moral decision-making” since there is “no consensus agreement on the moral status of a fetus and therefore the treatment of the fetus can be questioned clinically, socially, culturally, politically, legally and ethically.”

In 2005, the Los Angeles Times interviewed several fetal surgeons during an investigation into the risks and ethics behind the rapidly developing practice. Its report identified two key arguments critics of fetal surgery maintain:

But Sarah Torre, a policy analyst with The Heritage Foundation’s DeVos Center for Religion and Civil Society, says critics are wrong to consider the mother’s health superior to her unborn child who may face life-threatening defects.

“Working to save and heal unborn children in utero testifies to the dignity of both mother and child—that each has an inherent value and right to life, regardless of disability or illness,” Torre told The Daily Signal.

“The advances in many fetal surgeries over the past few decades should be applauded,” she added. “Through these procedures, parents faced with the otherwise devastating news that their unborn child is sick are given hope and the chance of healing.”

Dr. Jack Rychik, director of the Fetal Heart Program at Children’s Hospital of Philadelphia, wrote a piece in October describing the recent expansion of fetal surgery into congenital heart care.

“Innovative fetal intervention may prove to be a game-changer in many cases,” says Rychik.

This article was updated on 12/12/14 to correct a previous error in the reported number of babies born with complex birth defects annually.