17 Political Books and Movies That Would Make Great Christmas Gifts 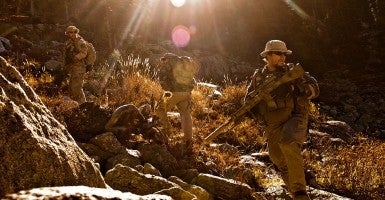 Christmas is just around the corner. If you’re still searching for the perfect gift, take a look at what’s on our Christmas list:

1. “America: Imagine the World Without Her”

In this classic 1939 film, Jimmy Stewart portrays Jefferson Smith, a patriotic leader of the Boy Rangers who is suddenly appointed a senator. The naïve Smith must confront the corruption he finds in Washington and in his childhood hero. “Mr. Smith Goes to Washington” is a great gift for patriots and movie buffs alike.

William F. Buckley once described Chambers as “the most important American defector from communism.” This compelling autobiography by the former Soviet spy makes a great gift for Cold War junkies. Based on the devastating invasion of Normandy during World War II, this film was named the “best war film of all time” in a 2009 poll of movie fans.

5. “America’s Way Back” by Donald Devine

This book reveals the insight of President Reagan’s former director of the Office of Personnel Management who the New York Times once referred to as “the Grinch.”

Directed by Steven Spielberg, this 2012 film was nominated for 12 Academy Awards, including Best Picture. Photo: ‘In Love With America’

7. “Falling in Love With America Again” by Jim DeMint

The former senator and current president of The Heritage Foundation writes that conservative ideas are actually American ideas and outlines how we can preserve these ideas for future generations.

This portrayal of the men and women who searched for and killed Osama bin Laden was nominated for five Academy Awards.

This biography of a president is written by another president, who happens to be his son. This personal account of 41 by 43 would make a wonderful gift for history lovers. This critically acclaimed film debuted in 1976 as a screen adaptation of Bob Woodward and Carl Bernstein’s first-hand account of their coverage of the Watergate scandal. It’s an excellent gift for those too young to have witnessed the major political event unfold.

11. “Assault and Flattery: The Truth About the Left and Their War on Women” by Katie Pavlich

In “Assault and Flattery,” New York Times bestselling author and Fox News contributor Katie Pavlich says that there is a war on women—and it’s being waged by the left.

The true story of Navy SEAL Marcus Luttrell and SEAL Team 10 is available both in his autobiography and in the motion picture starring Mark Wahlberg.

While this novella differs in length from “Atlas Shrugged,” it still manages to capture the dangers inherent in a society where the collective must act on behalf of the greater good and sacrifice their own dreams, drive and initiative in the process. Before there was “House of Cards,” D.C. insiders turned to this TV drama to satiate their political appetite. With a cast that includes Martin Sheen, Rob Lowe and Allison Janney, what’s not to like?

15. “Dreamers and Deceivers: True Stories of the Heroes and Villains Who Made America” by Glenn Beck

In this follow-up to 2013’s “Miracles and Massacres,” the popular talk-show host examines little-known stories about major figures in American history.

In this 2008 retelling of “A Christmas Carol,” anti-American filmmaker “Michael Malone” wants to ban the Fourth of July. He is then visited by three ghosts who try to show him the holiday’s—and the country’s—merits.

This annotated version of the U.S. Constitution provides legal and historical insight into the document that formed the framework for the most prosperous nation in history.