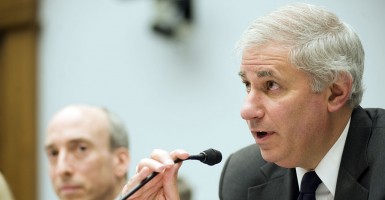 FDIC Chairman Martin Gruenberg is under fire for what some of his agency's top officials did in Operation Choke Point. (Photo: Louie Palu/Newscom)

Senior FDIC officials must be held accountable for banking regulators’ “unethical” and “illegal” actions against legitimate businesses that are out of favor with the Obama administration, a congressman with a background in banking said today.

In a letter to Martin Gruenberg, chairman of the Federal Deposit Insurance Corporation, Rep. Blaine Luetkemeyer, R-Mo., says he wants a full review of all FDIC employees involved in Operation Choke Point.

Luetkemeyer, a rising member of the House Financial Services Committee, names five officials as “implicated in this unsavory affair,” and adds that “to allow these individuals to go without penalty would be unjust.”

The Daily Signal reported Monday that the secretive initiative, orchestrated by the Justice Department, was the subject of a second scathing investigative report by the House Oversight and Government Reform Committee. The panel’s report reprints emails between various FDIC officials, including those named in Luetkemeyer’s letter.

Luetkemeyer, a leader in the fight to shut down Operation Choke Point, met yesterday with Gruenberg. They discussed details of the House committee’s 20-page report on the FDIC’s efforts to pressure banks into cutting ties with payday lenders and other businesses that the Obama administration finds objectionable. FDIC officials “lied” and “misled” Congress about the secretive operation, the Missouri Republican says in his letter.

In his meeting with the FDIC chairman, Luetkemeyer summarizes in the letter, he demanded that staffers who participated in Choke Point “be held accountable” for allowing personal and political views to interfere with the regulatory agency’s responsibilities.

There is neither doubt nor denial that numerous members of your senior staff have allowed personal and political views to interfere with the important work of the FDIC. Their actions have not only called into question their ability to appropriately carry out their duties, but also have exposed your entire agency to what many of your staff would refer to as significant ‘reputational risk.’ You must act swiftly to end this unprecedented and, in my opinion, illegal program and send the message that this behavior is inappropriate and will not be tolerated under your leadership.

By “reputational risk,” Luetkemeyer was referring to a list originating within the FDIC that categorizing certain industries as risks to the banking industry. The goal, as part of Operation Choke Point, was to encourage banks to end relationships with customers engaged in those enterprises, choking them off from their financial life blood. Republicans have criticized federal regulators and government lawyers under Attorney General Eric Holder for associating legal enterprises such as firearms and ammunition merchants and home-based charities with blatantly illegal or offensive industries such as Ponzi schemes and pornography.

Of Monday’s report by the House panel, which unearthed emails between FDIC officials who sought to ensure banks “get the message” about the businesses they don’t like and cut credit or close accounts, Luetkemeyer said yesterday, “our worst fears have been validated.” He added in a statement:

The report clearly shows that senior members of the FDIC lied to me, to congressional staff, to other members of Congress, and in testimony to several House committees. Not only that, the communications contained in the report show that the FDIC is inserting personal views into banking supervision, which is unethical and completely unacceptable.

Luetkemeyer urges Gruenberg to use his authority to alter and improve the FDIC’s examination process to create more transparency and reign in “vigilante activists.”

He points Gruenberg to his own legislation that grew out of  Operation Choke Point. Called the Financial Institution Customer Protection Act, the bill would prohibit banking regulators from suggesting, requesting or ordering a financial institution to terminate a banking relationship without “material reason.” It states that ‘reputational risk’ alone is not a reason to order accounts to be terminated.

In a statement to The Daily Signal, Barbara Hagenbaugh, FDIC’s deputy to the chairman for communications, said:

It is the FDIC’s policy that insured institutions that properly manage customer relationships are neither prohibited nor discouraged from providing services to any customer operating in compliance with applicable law. The FDIC has reiterated this policy to our bank supervisors and we encourage banks to report to FDIC management, the ombudsmen, or the inspector general if they feel this policy is not being followed. The FDIC has a responsibility to cooperate with other government agencies and to ensure that the banks we supervise are adhering to laws, including those governing anti-money laundering and terrorist financing.

Luetkemeyer, who previously worked as a bank regulator, said that Congress will not tolerate actions by a federal agency as described in the House report and that he will continue to hold the FDIC accountable.

“Throughout my more than 35 years in the banking industry, I have always had the utmost respect for the FDIC and the manner in which it carries out its mission,” the congressman said in his prepared statement. “That respect has been greatly diminished.”

This article has been updated to include an official FDIC response.