Why These Citizens Voted to Repeal a Bad ‘Civil Rights’ Law 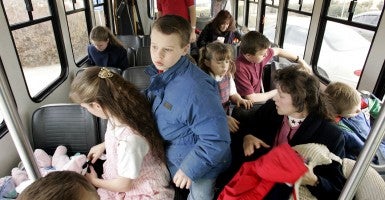 The Duggar family of the TLC show '19 Kids and Counting' worked against this legislation. (Photo: Brad Loper/Newscom)

One way to prevent the government from violating your rights is to stop bad legislation in its tracks. Citizens in Fayetteville, Ark., did just that Tuesday. After the city council of the college town passed a “civil rights” ordinance that undermined basic civil liberties back in August, voters took to the polls to repeal the law, ordinance 119.

As the organizer of the Repeal 119 campaign explained, this is bad public policy:

It was called the Civil Rights Ordinance, but it was misnamed. It was an ordinance that actually took away civil rights and freedom from people. It criminalized civil behavior. It didn’t accomplish the stated purpose of the ordinance, and it was crafted by an outside group. It wasn’t something Fayetteville residents put together.

That’s entirely right. Laws that create special privileges based on sexual orientation and gender identity are being used to trump fundamental civil liberties such as freedom of speech and the free exercise of religion. They tend to be vague and overly broad without clear definitions of what conduct can and cannot be penalized. And they create new, subjective protected classes that expose citizens to unimaginable liability.

Indeed, bad state and local SOGI laws are frequently the measures that allow the government to penalize and punish people for their beliefs about marriage. SOGI laws have been at the center of the cases involving photographers, bakers and florists, as well as farmers, and even ordained ministers.

Laws that create special privileges based on sexual orientation and gender identity are being used to trump fundamental civil liberties such as freedom of speech and the free exercise of religion.

Traditional civil rights include protections for the rights to free speech, religious liberty and free association, as well as the right to vote, own property and enter into contracts. All Americans stand equally before the law and have their civil rights equally protected.

But no one has the right to have the government force a particular minister to marry them, or a certain photographer to capture the first kiss, or a baker to bake the wedding cake. Declining to perform these services doesn’t violate anyone’s rights. Some citizens may conclude that they cannot in good conscience participate in a same-sex ceremony, from priests and pastors to bakers and florists. The government should not force them to choose between their religious beliefs and their livelihood.

Ordinary Americans—both those in favor of gay marriage and those who oppose gay marriage—agree the government should not penalize those who hold the historic view of marriage. So the citizens of Fayetteville were acting for social justice and the common good when they voted to repeal this onerous law. Citizens must work to prevent or repeal laws that create special privileges based on sexual orientation and gender identity. We also must insist on laws that protect religious freedom and the rights of conscience.

Citizens must do this because there are some ideologues who want SOGI laws to trump basic civil liberties. There are some activists who are working to pass laws that would allow the government to coerce individuals to violate their beliefs about marriage. And, as the organizer of Repeal 119 noted, they frequently are coming from out of town.

Indeed, SOGI laws are being pushed on unsuspecting citizens at the federal, state and local level by the Human Rights Campaign. HRC just launched a new project for 2015 it dubs “Beyond Marriage Equality.”

Citizens do two things to prevent government from violating basic civil liberties. First, citizens should argue against SOGI policies at the federal, state and local level.

Second, policy should prevent the government from violating the civil rights of citizens. At the federal level, Congress has an opportunity to protect religious liberty and the rights of conscience.

Protecting religious liberty and the rights of conscience is the embodiment of a principled pluralism that fosters a more diverse civil sphere. Indeed, tolerance is essential to promoting peaceful coexistence even amid disagreement. In a nation founded on limited government and religious freedom, government should not attempt to coerce any citizen, association or business into celebrating same-sex relationships.