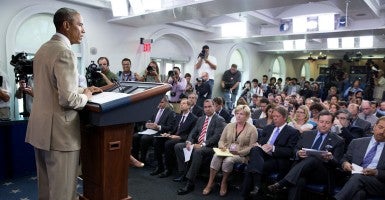 President Obama once  delivered a “profanity-laced tirade” in an off-the-record session with reporters when he wasn’t happy about media coverage, according to retired ABC News correspondent Ann Compton.

In an interview with C-Span, Compton said that in the last year she had seen “Barack Obama really angry twice:”

Both were off-the-record times. One, profanity-laced where he thought the press was making too much of scandals that he did not think were scandals. Another where he took us to task for not understanding the limits he has with foreign policy and the way he’s dealing with the Middle East and Iraq, and Afghanistan. And I don’t find him apologetic. But I find him willing to stand up to the press and look them in the eye, even though it was off the record and just give us hell.

Compton also criticized the Obama administration on transparency, saying it was “more opaque” than any other she had covered.

“Before I walked out the door on September 10, I was a strong voice for complaining that this particular administration has been more opaque than any I have covered … I think most presidents have been far more forthcoming than the second Obama term, in terms of what the president is doing every day,” she said.

Compton said that she went through a period of “three or four months where I was never in the Oval Office once on my pool day.”

Compton said Obama “is the first president with his own journalistic tools.” The White House frequently releases its own videos and images, but the press is often barred from photo-ops.

“I think it is fine if the president of the United States wants to present his own version of what he did all week,” said Compton. “Most of it is behind the scenes shots of him with Supreme Court justices and leaders coming in from Wall Street. It is fine that he puts it on the internet and that everybody can see it. Those same elements should not be blocked from the White House press corps.”

Newsbusters recently reported on the interview (which aired in October) after a series of tweets by The Heritage Foundation’s Mike Gonzalez.