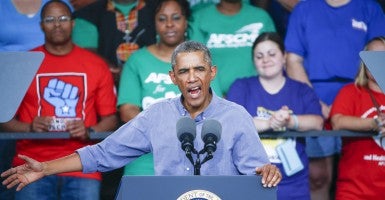 Under President Obama, government officials are aggressively enforcing the law against employers who fail to pay the minimum wage, deny overtime compensation and misclassify workers as contractors.

That was the central message Labor Secretary Tom Perez delivered before an audience of approximately 100 attendees last week at the Center for American Progress in Washington, D.C.

When Obama took office, there were 730 investigators in the Labor Department’s Wage and Hour Division. Today, there are more than 1,000.

Perez, who previously served as a Center for American Progress trustee, used the Dec. 4 speech to call for a higher minimum wage and stronger overtime laws to ensure that employees “receive a fair day’s pay for a fair day’s work.”

He also made it clear that “the law is only as effective as the political will of those enforcing it.” At the direction of Obama, the U.S. Labor Department is “back in the enforcement business, putting more cops on the beat and giving them more resources to protect working families who bear the greatest burden when labor standards are violated,” Perez said.

At the outset of the administration, there were 730 investigators in the department’s Wage and Hour Division. Today, there are more than 1,000, Perez informed attendees.

During his talk, Perez called attention to the findings of a study from the Eastern Research Group, a consulting firm based in Lexington, Mass., which showed hundreds of thousands of workers in both New York and California are the victims of minimum-wage violations. These alleged violations are particularly acute in the hotel and restaurant industry, according to the group.

“The study concluded that minimum wage violations in New York and California are widespread and have a significant economic impact,” Perez told audience members. “It confirmed what we intuitively know—unscrupulous employers push their workers into poverty when they fail to pay what the law requires.”

The report found that in New York and California, approximately 3 percent to 6 percent of all workers covered by the Fair Labor Standards Act experience minimum wage violations, Perez explained.

“That translates into a total of between $20 [million] and $29 million in lost weekly income for those workers, which represents 40 percent or more of their total pay,” he added. “Imagine that! Forty cents out of every dollar you earned doesn’t show up in your paycheck but in your employer’s pocket.”

At the direction of Obama, the U.S. Labor Department is “back in the enforcement business,” says Labor Secretary Thomas Perez.

James Sherk, a senior policy analyst in labor economics at The Heritage Foundation, said Perez did not mention something the Labor Department’s consultants highlighted in their report—significant problems with measurement error in the data.

“People often misstate their hours and earnings when interviewed—after the fact—by statistical agencies,” Sherk said. “These numbers could represent actual wage violations, or they could represent people rounding down their earnings when answering the survey. That’s why these surveys are never used for enforcement actions.”

Sherk said the only real way to determine the extent of legal violations would be doing random audits of companies’ books. “This analysis doesn’t tell us much,” he added.

Perez was joined by his colleague, David Weil, who heads up the Labor Department’s Wage and Hour Division, and Andy Shallal, owner and founder of Busboys and Poets. Two state-level officials from New York and California also spoke at the Dec. 4 event.

Shallal took the opportunity to give “a shout out to the Restaurant Opportunity Center” for the work it has done to bring more attention to the plight of underpaid, poorly treated restaurant workers.

The Restaurant Opportunity Center is a non-profit group formed after the 9/11 attacks to help displaced workers. It has taken a lead role in demonstrations across the country devoted to raising both the general minimum wage and the minimum wage for tipped workers.

“The community does not hold restaurants to very high standards for how the workers are treated,” Shallal alleged. “They want good service and their organic chicken, but when the employee is shortchanged there is no outrage.” The concern over “eroding labor standards” that dominated the discussion was not limited to the minimum wage. Perez also touched on “the growing practice of worker misclassification.” This is done, Perez said, so some employers can avoid paying benefits.

“There are folks out there who are legitimately independent contractors, and they play an important role in the economy,” Perez said. “But when you call your employees independent contractors—stripping them of rights and benefits in the process, dodging your own tax obligations as an employer—what you’re doing is committing fraud, plain and simple.”