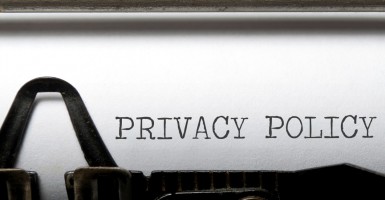 With technology outpacing privacy laws, Virginia lawmakers are trying to plan for the unexpected.

Anderson said he may even try to push a constitutional amendment, which is harder to get than a law but also virtually impossible to alter.

Months of meetings attended by the two co-chairs of the Ben Franklin Privacy Caucus have led them to the same conclusion — people don’t want their government spying on them.

“I am still in a place where I think that we essentially have a choice,” Anderson said on Monday. “We can trade away a little bit of liberty, in exchange for some greater degree of security. And I would actually rather err on the side of liberty.”

Some lawmakers were unsettled to learn last year police departments are still randomly collecting license plate information and storing it for months, despite an attorney general opinion calling the practice illegal. Thus, the Ben Franklin Privacy Caucus was born.

Anderson and Petersen are still nailing down the specifics, keeping the language broad enough to include any kind of technology that is, as of yet, uncreated. Police agencies, which Anderson realizes may not be comfortable with this kind of restriction, still have time to present their cases. Law enforcement has been vocal about how useful stored information, such as license plate data, can be.

The U.S. Constitution, Anderson said, provides something in broad terms that Virginia’s state constitution doesn’t — prohibitions against unreasonable search and seizure through the Fourth Amendment.

A constitutional amendment, or even a law, would codify a 2013 official opinion from former Attorney General Ken Cuccinelli. In an opinion that gained rare agreement from the far left and far right alike, Cuccinelli said police authorities have no right to randomly collect and keep people’s license plate information without a warrant.

“Now is the year,” Anderson said.

“That way, we will at least provide broad constitutional guidelines on the employment of technology in collecting what many people feel are private data that should not be disclosed to government,” he added.