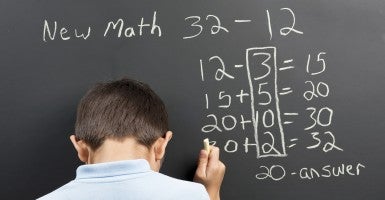 Common Core in Mississippi might be on the chopping block if Lt. Gov. Tate Reeves has his way.

Reeves said this week he supports scrapping Common Core and replacing it with another curriculum.

The Republican said he wants to form a task force of parents, teachers and business leaders to investigate a new curriculum to replace Common Core, which has been under fire in the state by the Mississippi Senate Conservative Coalition and others.

Reeves said he’s inspired to junk the curriculum because of Oklahoma’s experience with Common Core. The state lost its waiver from the most onerous standards of the 2001 No Child Left Behind Act for returning to its old curriculum, but later appealed and got its waiver back.

“Oklahoma was the straw that broke the camel’s back,” Reeves said. “They (the federal government) was going to penalize Oklahoma’s kids because their leaders wanted a better approach.”

The move aligns Reeves, who could face a primary challenge from the right in 2015, with other Republicans in the region. Mississippi Gov. Phil Bryant has stated his opposition to the curriculum and signed an executive order in 2013 to ensure the state and not the federal government would be in charge of developing a new curriculum. Louisiana Gov. Bobby Jindal has taken his state off the new standards.

Bryant applauded the move in a statement and called Common Core a “failed program.”

Mississippi adopted the new standards for math and science in 2010 — one of 46 states participating — and testing of students was to begin in 2015.

The Mississippi Department of Education said in a statement that junking Common Core would be “changing the playbook in the middle of the game” and could be costly. Last year, the state spent $694,000 implementing Common Core.