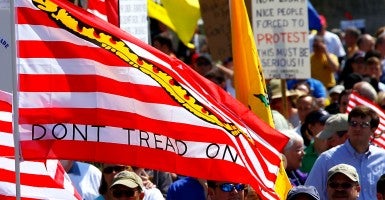 MADISON, Wis. – Marve Munyon and his two fellow members on the Rock River Patriots board of directors finally were forced to throw up their hands.

The Internal Revenue Service has a way of doing that to people.

After being hounded for years, the group with the tea party-sounding name gave up its pursuit of 501(c)(4), tax-exempt status, took the best deal it could get and walked away from the fight.

“We finally got out from underneath that mess,” Munyon said.

In April 2012, Munyon applied for 501(c)(4) designation for the group, as a pending tax-exempt, “social welfare” organization.

Munyon was informed by letter in January 2013 the IRS was delayed in reviewing applications for tax-exempt status. All the while the meter was running on the conservative organization’s tab with the IRS.

The IRS did offer a deal, Munyon said — an offer the limited-government advocate had to refuse.

An IRS agent in Ogden, Utah, informed Munyon that if he could pledge the Rock River Patriots never violated an election law in the past, were not violating any such laws at present and would never do so in the future, the IRS would guarantee the group a favorable ruling on its tax-exempt status within two weeks.

“I said, ‘If you have not been able to grant us a favorable status in two years, how could you grant it to us in two weeks?’” Munyon said in January.  “Their comeback was that they ‘didn’t call to argue. We called you to help you.’”

The agency’s ‘help’ eventually amounted to “failure to file” fees and “failure to pay” penalties that amounted to nearly as much as the application fee. And the fees kept mounting even as the IRS deliberated on whether the group would make the 501(c)(4) cut.

Finally, after two years, hours of phone calls, continuous correspondence and growing aggravation, the IRS refunded the Rock River Patriots the penalties — a total of $153.65, plus two checks for $1.16 and $3.04, without explanation, Munyon said. The Wisconsin Department of Revenue refunded the group $150 in late fees and charges, he said.

M.D. Kittle is an investigative reporter for MacIver News Service, a free-market news organization based in Madison, Wisconsin.