ISIS Is Watching U.S. Military Members and Their Families on Social Media 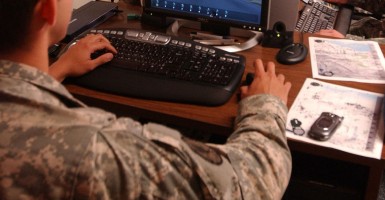 Are U.S. military members at risk on social media?

The Federal Bureau of Investigation and the Department of Homeland Security this weekend jointly issued the strongest warning yet for U.S. servicemen to scrub their accounts on Facebook, Twitter and other social media.

As reported by Fox News’s Catherine Herridge, the FBI and DHS are warning against posting information that could put members of the U.S. armed forces and their families at risk for attack from supporters of ISIS (Islamic State of Iraq and Syria).

The bulletin said the FBI believes “individuals overseas are spotting and assessing like-minded individuals who are willing and capable of conducting attacks against current and former U.S.-based members of the United States military.”

The threat is real, though it has manifested itself only in small numbers so far. In Canada, two soldiers guarding the Tomb of the Unknown Soldier were killed in October and the gunman opened fire on the Canadian parliament.

Also in October, it was reported that an Air Force father and his teenage son were singled out by ISIS sympathizers on Facebook and targeted with offensive messages after they posted pictures of a bombing raid. The latter incident prompted the Army to issue an intelligence bulletin warning that ISIS militants were calling on supporters to troll social media for information on U.S. military to single them out for attack.

According to Fox’s commentator and national security expert, K.T. McFarland, the president of Iraq had stated that cell phones and social media played a major role in the surrender of Iraqi military forces over the summer, with military members having received text messages from ISIS threatening their families at home unless they laid down their weapons.

Social media have become a primary way for U.S. service men and women abroad to keep in contact with their families. Yet, it has to be done within the context of good Internet security protocols. These would include encryption, proper security and privacy settings, and limiting the amount of photos and personal information posted.

In other wars, the public has been urged to protect information from spying eyes and ears. When dealing with an enemy as unscrupulous, yet tech and propaganda savvy as ISIS, this is an essential common-sense precaution.