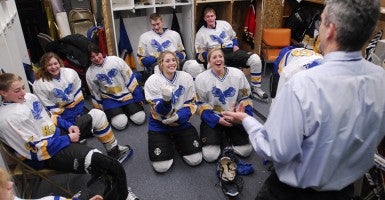 Kenny Lake High School hockey coach Bob Jones talks to his team before they walk outside to the rink for a game. Kenny Lake's roster is co-ed. A Minnesota school is taking the "co-ed" team one step further -- pushing for a new policy for transgender athletes. (Photo: Marc Lester/MCT/Newscom)

Minnesota high schools may soon be affected by a proposed policy that would allow students to participate in sports based on their gender identity rather than their biological sex.

On Dec. 4, the board of directors of the Minnesota State High School League will vote on the policy.

According to the draft of the policy, titled “Gender Identity Participation in MSHSL Activities:”

The Minnesota State High School League (MSHSL) allows participation for all students regardless of their gender-related identity or expression. This policy is designed to guide member school personnel as they create an environment free from discrimination and provide an equal opportunity for participation in athletics in accordance with applicable state and federal laws, rules and regulations.

The draft defines “gender identity” as “a person’s deeply felt internal sense of being male or female,” and a “transgender person” as someone “whose gender-related identity is different from and does not match the gender assigned at birth.”

Pending approval, if a student can provide evidence of a “sincerely held” gender identity that differs from the “gender assigned at birth,” then “the student will be eligible to participate in MSHSL activities consistent with the student’s gender-related identification for the balance of the student’s high school eligibility.”

Per the draft, “evidence” of a student’s gender identity includes written statements from the student and from their “parents, friends, and/or teachers.”

The Minnesota Child Protection League has criticized the policy, claiming that in addition to transgender students playing “on the team opposite their biological gender,” the policy would necessitate that these students “shower with each other, dress with each other and share hotel accommodations.”

The Child Protection League Action recently ran a full page, color ad in the sports section of the Minneapolis Star-Tribune proclaiming, “A male wants to shower beside your 14-year-old daughter. Are YOU ok with that?” Another ad slammed the policy as “the end of Girls’ Sports.”

CPLA estimates that MSHSL has received 10,000 emails in opposition to the policy.

Advocates of the policy say that these concerns unfairly target transgender students.

Rob Dunkelberger from Transforming Families told Minneapolis’ KARE 11, “When my son was transitioning I had fears, but they were all based on my past. Kids don’t care. That’s not the case anymore… What you are looking at passing here will give him the support he needs.”

More information about Thursday’s MSHSL board meeting may be found here.