How This Tea Party Hopes to Help Ferguson Merchants 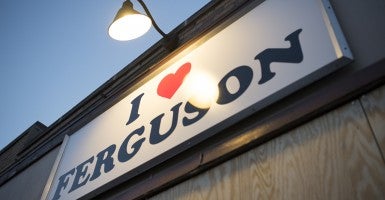 Community members had to board up their 'I Heart Ferguson' shop that fundraised for businesses that have been victims of looting and vandalism. (Photo: Zach D. Roberts/Newscom)

Earlier that night, a grand jury had gone public with its decision not to indict a white police officer for shooting and killing a young black man. Anger quickly spread through a crowd of protesters gathered in the streets of the St. Louis suburb.

They marched and chanted, and some of them looted and rioted, leaving smoldering buildings, broken windows and damaged storefronts in their wake.

Now, DuBose and other Ferguson merchants must rebuild, grappling with how to pay the bills. And Christmas soon will be here.

That’s where Bill Hennessy, a founder of the St. Louis Tea Party Coalition, hopes to help.

Hennessy drafted a list of eight ideas to save Christmas in Ferguson and help DuBose and other business owners and employees.

Time is short. The people affected by last night’s riots need help rebuilding and jobs right now. While I don’t have complete plans, I can throw out eight ideas. Please make one of these come to life.

>>> Area Residents Take to Ferguson’s Streets. But Not For the Reason You Think.

Among other calls to action, Hennessy asked 100 companies in the St. Louis area to hire one person affected by the looting and riots for one year beginning Dec. 1  He proposed that companies both in the region and around the country “adopt” a damaged business and assist with rebuilding. Many of these, he wrote, need money to begin the process of fixing the damage.

“We cannot rely on government — government is the problem, not the solution,” he wrote. “We have to rely on ourselves.”

>>> Watch: Is Ferguson Really About Race?

Hennessy, a native of Wildwood, Mo., organized a “buycott” in Ferguson in August as a way to help boost the local economy.

After Officer Darren Wilson, 28,  fatally shot Michael Brown, 18,  on Aug. 9, protests quickly turned violent and businesses were looted much in the same way as after last week’s announcement that the grand jury would not indict Wilson.

At the time, Hennessy called on consumers to head to Ferguson to shop in affected stores.

“The goal is to let everyone in the area know that those places are open and to generate commerce in the area,” he said. “A lot of them are very small. … The little shops are left on their own.”

More than 40 residents affiliated with the St. Louis Tea Party Coalition shopped in Ferguson during the buycott.

“With the city’s main business district laid to rubble, buycotts won’t have much effect,” Hennessy wrote last week. “And Christmas is around the corner.”

>>> Watch: Lawyers on Both Sides Answer the Question You’ve Been Asking