Why Legalizing Pot Is a Bad Idea 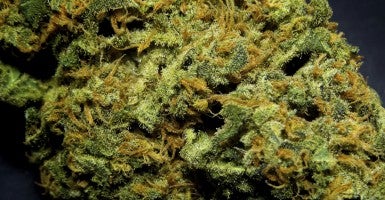 At first blush, it may appear that the fight to thwart marijuana legalization is a lost cause. Pot pushers want you to believe that legalization is inevitable. They point to legalization successes this November in Alaska, Oregon and the District of Columbia.

But Big Pot lost in Florida, and five cities in pot-crazy Colorado outlawed the sale of marijuana, including Lakewood, Canon City, Palisade, Palmer Lake and Ramah. And now comes the latest Gallup poll from Nov. 6, which shows that support for marijuana legalization is down seven points from last year, from 58 percent to 51 percent. Even liberal support for legalization dropped four points from last year.

So why did the pot pushers lose a large state like Florida, and why is support for legalization falling?

That’s a tough question. But perhaps the public is starting to pay attention to scientific data and the actual dangers of marijuana as well as the negative stories coming out of Colorado and Washington State since those states legalized marijuana.

The science is clear and unambiguous – pot is a dangerous substance. It is not like alcohol at all. There is a reason it is classified as a Schedule I controlled dangerous substance, right along with heroin, LSD and ecstasy. The American Medical Association, the American Lung Association and other reputable doctors and scientists all reject legalization.

As Dr. Kevin Sabet, former senior advisor to President Obama’s drug policy office, states in his book “Reefer Sanity ‘Seven Great Myths About Marijuana,” the average strength of today’s marijuana is five to six times what it was in the 1960s and 1970s, and upwards of 10 to 20 times stronger than in the past.

Even the liberal editorial pages of The Washington Post urged voters not to legalize pot in the ballot initiative this past Nov. 4. The Post noted that “the rush to legalize marijuana gives us – and we hope voters – serious pause.”

A report by a federal grant-funded agency in Colorado found seven specific negative side effects that pot legalization has caused in Colorado:

2) youth consumption of marijuana has increased;

3) drug-related suspensions/expulsions increased 32 percent over a 5-year period and a majority was for marijuana;

4) an increase in college users;

7) marijuana-related hospitalizations has increased 82 percent since 2008.

Others have picked up on the recent findings by the Journal of Addiction from Kings College London that found that marijuana is highly addictive, causes mental health problems and is a gateway drug to other illegal and dangerous drugs. That report found that regular adolescent marijuana users have lower educational attainment than non-using peers, that they were more likely to use other illegal drugs, the use produced intellectual impairment, that use doubled the risk of being diagnosed with schizophrenia and increased the risk of heart attacks in middle-aged adults.

Add to that the recent study where 9.7 percent of respondents reported that they had smoked marijuana before coming to work, and you can see why responsible citizens, including employers and parents, are starting to question the pro-pot canard that smoking marijuana is no big deal and actually good for you.