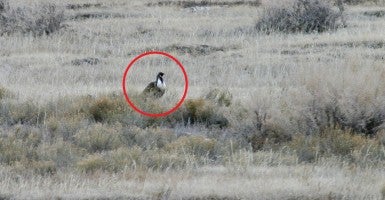 No good deed goes unpunished. Or at least, such was the case earlier this month when the U.S. Fish and Wildlife Service listed the Gunnison sage grouse as a “threatened” species.

Threats to the bird resulting from drought, disease, and habitat moved the states and particularly Gunnison County, Colo., to find creative solutions to protect and re-establish the bird.

Their mistake? They thought that a stable population in the Gunnison Valley would prevent the bird from being federally listed.

Yet the Fish and Wildlife Service did exactly that.

Despite Coloradans’ efforts, the Wild Earth Guardians—an environmental extremist lobbying organization—pressured the Fish and Wildlife Service to list the bird as endangered under the Endangered Species Act by Nov. 12 in an out-of-court settlement. The Fish and Wildlife Service announced its decision to list the bird as “threatened” and to designate more than 1.4 million acres of potential habitat.

The decision has been met with bipartisan displeasure.

Colorado Gov. John Hickenlooper, a Democrat, responded that “this sends a discouraging message to communities willing to take significant actions to protect species and complicates our good-faith efforts to work with local stakeholders on locally driven approaches.”

Utah Gov. Gary Herbert, a Republican, called the decision a step backward for conservation and the economy.

Obama repeatedly has said we don’t need to choose between the environment and stewarding our natural resources, but the administration’s decision dangerously assumes the exact opposite.

The Endangered Species Act, under which the Fish and Wildlife Service acted, perversely incentivizes the endangerment of vulnerable species by pitting landowners—the bird’s most immediate and natural caretakers—against vulnerable species by inviting heavy-handed federal intervention that often completely devalues property.

Given the way the Endangered Species Act works now, federal bureaucrats too often attempt to solve the problem by simply stopping development. For many, that risk is too costly and, as a result, these species suffer. For example, in the 1980s, one North Carolina landowner was arrested for cutting down pine trees on his property because the trees were a potential habitat for endangered red-cockaded woodpeckers.

Or consider this example from 2012. The Friends of Animals and WildEarth Guardians filed suit against the Fish and Wildlife Service to require Texas game ranchers to get a “take permit” from the federal government before hunting animals raised on their own private property. The addax, Dama gazelle and scimitar-horned oryx (affectionately known as the “three amigos”) are endangered in their native Africa, but Texas game ranches had begun raising and building up herds. They funded their efforts by offering select hunts.

Before the “environmentalists” won their lawsuit, ranchers pre-emptively offered inexpensive hunts to capitalize on their investment before regulations were finalized and devalued the hunts. As a result, the Exotic Wildlife Association estimated that the “three amigos” numbers in Texas are now at one-half to one-third of their 2010 levels.

Listing the Gunnison sage grouse disempowers and alienates rural landowners and ignores the concerted efforts of states and communities to protect the grouse. Species conservation efforts should be conducted on a situation-specific basis where the respect of private property and personal liberty are recognized as some of the most important tools to protecting America’s threatened species.