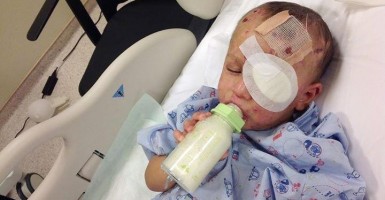 Hasan, 2, was wounded in a suicide bombing after his family escaped an ISIS-besieged town in northern Iraq. (Photo: courtesy Ali al-Bayati)

Ali Albayati, a neurologist in Iraq, learned of a little boy wounded in deadly bombings by ISIS terrorists the old-fashioned way: through a written story.

Back-to-back car bomb attacks Aug. 7 struck a building in Kirkuk, Iraq, used by Shiite Muslims for religious purposes, reportedly killing and wounding scores of people. Among the severely injured was the 2-year-old boy, who had taken shelter there with his family.

Sam Billett, 31, a Briton who works in public relations, discovered the story the new-media way: through Twitter, after The Daily Signal published an article about the plight of the boy, whose name is Hasan Uday Albayati.

Little Hasan was among those wounded or killed at the scene of this double car bombing Aug. 7 in Kirkuk, Iraq. (Photo courtesy Ali Albayati)

Through the kind of sharing allowed in a world connected through email and social media, Albayati (who is not related to Hasan) and Billett united to bring healing to Hasan.

Shrapnel had lodged deep into Hasan’s left eye, nearly blinding it. The boy also suffered a fractured arm and facial cuts and bruises.

The money raised by Billett’s organization — collected entirely online through a page on the website gofundme.com — paid for Hasan to fly to Tehran, Iran, where the boy underwent special eye surgery.

Hasan also had two operations on his left arm at a hospital in Iraq.

He is almost fully healed now, with only slight facial scarring. He lives a life as normal as can be in Iraq, at the home of his uncle and cousins in Iraq. (For security reasons, Billett asks that The Daily Signal not name the city.)

“It was beautiful,” Albayati says of his collaboration with Billett during a Skype interview with The Daily Signal from Baghdad.

Billett, in a separate Skype conversation from London, is more expansive:

We did this because we were moved to action. In today’s world of social media, doing nothing no longer applies. When we can, we should.

At the time of The Daily Signal’s first report on Hasan, intelligence indicated that the boy had lost his entire family in the bombings. (The story reflected that understanding, depicting the boy as the family’s sole survivor, and also misspelled his name as Hassan based on available information.)

However,  Billett and Albayati were able to confirm that Hasan’s mother and uncle survived. Turkmen Helps His Own

The Sunni Muslim jihadists who make up the Islamic State terrorist group, also known as ISIS or ISIL, have become notorious for their brutality to fellow Muslims as well as Christians and other those of other religions in Iraq and Syria.

What could have been just another mourned but quickly forgotten ISIS attack against Shiite Muslims became a world-spanning act of philanthropy in Hasan’s case.

Today, Hasan and his mother can’t return to their home village of Brauchelli because it was overrun by ISIS militants during the summer. Hasan’s father died in that attack.

Hasan and his family are Shiite Turkmen, as is Albayati, the neurologist who would come to play an important role in the boy’s life.

In June, many Turkmen villages — clustered about 100 miles north of Baghdad — came under attack from ISIS.

The Turkmen, with linguistic and cultural ties to Turkey, have lived in northern Iraq for centuries. Some are Shiites, some are Sunnis. ISIS considers them infidels.

The plight of some 17,000 Shite Turkmen in the town of Amiri caught the world’s attention after the United Nations described the threat as similar to the one faced by the Yezidi minority, who were forced by the advance of ISIS to flee to Mount Sinjar in Iraq.

>>> For Yezidis Displaced by ISIS, a Long Way Home

In late August, a coalition of Iraqi and Iranian militias backed by American air support drove off the ISIS terrorists.

From the relative safety of his home in Baghdad, Albayati had tracked ISIS’s methodical destruction of villages all summer long, through firsthand accounts written by villagers.

A Turkmen from Hasan’s village wrote about the bomb attack in Kirkuk, detailing Hasan’s injuries.

Albayati saw the story, translated it to English, and sent it to U.S.-based Iraqi activists. One of those activists shared Hasan’s story with The Daily Signal, the multimedia news organization of The Heritage Foundation, which published an article Aug. 28 featuring Hasan.

Albayati hoped attention to the story would bring action.

Three weeks after the bombing, when it ran, Hasan received limited medical treatment at Faruk Medical City in the Sulaymaniyah province of Iraqi Kurdistan.

Hasan lay in a hospital bed, bandages covering part of his face and his left eye, red scabs dotting his forehead and cheeks. From Aziz to Hasan

In London, Billett’s desire to act actually began with failure.

On Aug. 16, Billet saw a story published by the BBC and The Daily Telegraph about another boy — a disabled, 4-year-old Yezidi who was deserted in Sinjar. Facing an ISIS assault on their village, the boy’s parents had left their weak son behind as they sought to save their five other children.

Billett, along with seven others from disparate places such as India, New Zealand, Croatia, Australia and the U.S., began using the hashtag #littleyazidiboy on Twitter to draw attention to the boy’s struggle.

Their Twitter movement turned into a campaign to raise money. Two weeks after the group’s work began, however, the boy died of dehydration.

His name was Aziz.

The Aziz Legacy Children’s Fund now had a name, and when Billett saw The Daily Signal’s story about Hasan, it had a new opportunity to bring help and healing to a child. Billett says:

Aziz was a defenseless little boy stranded in the desert because of ISIS. His struggle brought the world together, and now we are trying to live out his legacy.

To help Hasan, Billett reached out to contacts in groups such as Doctors Without Borders and the United Nations Human Rights Council.

Those groups connected him with Kurdistan Save the Children, a charity with contacts in Iran.

At Faruk Medical City, Hasan’s left eye was cleaned and protected with a lens.

He was referred to a second Iraq hospital, but it did not offer the specialized treatment his eye needed.

The biggest issue, however, was that Hasan had no identification or other personal documents. When his family fled their village because of ISIS, the suddenness of the terrorists’ advance forced them to leave nearly everything behind.

Working together, Albayati and Billett sent a message to the office of the new Iraqi prime minister, Haider al-Abadi, explaining Hasan’s situation.

Hasan would have to leave Iraq to get the treatment he needed. The prime minister’s office provided passports so that Hasan, his mother and uncle could exit the country.

Kurdistan Save the Children arranged care for Hasan in Iran. The Iranian embassy in Iraq issued visas to the boy, his mother and uncle, and on Oct. 29 they flew to Tehran.

Save the Children representatives found a hospital to admit Hasan. After identifying more shrapnel in Hasan’s eye, doctors there removed the temporary lens and surgically repaired the eyelid.

For the first time since being wounded in the August bombings, the boy could close his eye all the way.

The Aziz Legacy Children’s Fund and Kurdistan Save the Children split the $3,500 cost for Hasan’s treatment and stay in Iran.

On Nov. 12, Hasan, his eye fully healed, returned with family members to Iraq on a flight paid for by Billett’s group.

As a social, digital-first news organization, The Daily Signal has the power to connect the lives of people across the globe. We are so proud of the impact that our reporting has had on Hasan’s life. It really demonstrates that high-quality journalism that rises above the din of political partisanship is critical to making the world a better place.

The happy outcome likely will inspire similar action, if Billett’s charity has anything to say about it.

The Aziz Legacy Children’s Fund is working to arrange treatment for a 2-year-old Turkmen girl named Rawa who has tumors on her face, neck and throat. Rawa and her family fled Tal Afar in June when ISIS captured that city.

Rawa, 2, will have to leave Iraq to get medical treatment that her family can’t afford. (Photo courtesy Ali Albayati)

Just before the terrorists ISIS came, Rawa was due to be treated there. After that appointment became impossible, a familiar doctor stepped in to treat Rawa as best he could.

His name is Ali Albayati.

“Dr. Ali really is something,” Billett says.  “I can’t say enough about him.”

As ISIS continues to rape, maim and kill, tearing apart families and wrecking infrastructure, Billett and Albayati promise to help give hope to children caught up in the violence. Billett says:

There is so much happening in Iraq with death and destruction, and children’s health care is slipping through the cracks. Things can’t move quickly enough for them. But the world can come together to support those children to show that they stand the right to life.