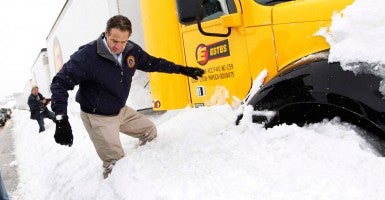 New York Gov. Andrew Cuomo has a snowy obstacle on a highway Nov. 19 after talking with a stranded trucker while surveying conditions in West Seneca, N.Y. (Photo: Sharon Cantillon/Buffalo News/Reuters/Newscom)

It’s time New York had its own state-run weather service to predict severe storms such as the one that has battered Buffalo, Gov. Andrew Cuomo says.

Cuomo called for a system of Empire State weather stations even as he issued an apology for accusing forecasters of not sufficiently warning of the impending snowstorm that would slam Buffalo.

Explaining the state government’s lack of preparedness for the historic storm that left 13 dead, the Democratic governor blamed the National Weather Service and its forecasters in a Saturday press conference in Alden, N.Y.:

Problem is, the federally funded weather forecasters in Buffalo had begun issuing warnings of the severe snowstorm as early as Sunday, Nov. 16, two days before it hit.

Meteorologists are not happy that Cuomo blamed them for the Buffalo snow disaster: http://t.co/WqepYAQrTw pic.twitter.com/MGDLGe5RTp

By Nov. 17, meteorologists were predicting what they called an “historic” lake-effect snow event, with snowfall at rates of three to five inches per hour.

The Weather Channel’s Sam Champion addressed the governor’s comments on his “AMHQ” show by compiling the National Weather Service’s advisories into a segment.

“To the extent any forecaster felt that they were criticized, that was not the intention,” Cuomo told reporters in Cheektowaga, N.Y., adding:

Cuomo used the crisis to pitch a multimillion-dollar, state-run weather service network, which he first announced in January.

“If you want to have a more accurate prediction of weather, you need more weather stations. You need more centers that are detecting changes in weather and communicating it,” he said.

The project, headed by SUNY Albany and the state Homeland Security Office, is estimated to cost more than $23 million.

Cuomo predicted a state-run service would be “the most sophisticated weather detection system, where we have hundreds of weather-detection stations all in one state.”