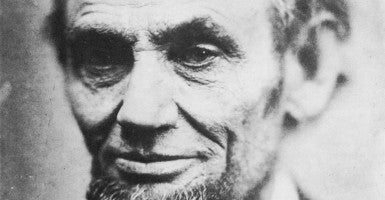 At this time of year 150 years ago, in the middle of the Civil War, Abraham Lincoln issued his second presidential proclamation setting apart the last Thursday of November as a day of national thanksgiving.

By doing so, and thus repeating a practice he had first established the year before, he set in motion a tradition that Americans still observe today.

Lincoln’s proclamation—and indeed the entire history of presidential proclamations of Thanksgiving—challenges contemporary liberalism’s claim, endorsed by liberal majorities on the Supreme Court, that the Constitution requires a strict separation of church and state.

According to this liberal theory, the Establishment Clause of the First Amendment not only forbids the government from establishing an official church—a proposition with which virtually no American, left or right, would disagree—but also prohibits the government from in any way encouraging religion, even non-coercively or by means of moral exhortation.

According to the strict separationists, government must remain so perfectly neutral between religious belief and unbelief that government officials may not even promote religion in what they say. This approach is not just strict but positively phobic in its attitude toward the relationship between politics and religion.

Lincoln’s Thanksgiving proclamation shows that this interpretation of the Constitution is an invention of the 20th century, not rooted in traditional American practice or the traditional American understanding of the First Amendment. For there can be no doubt that his proclamation was intended precisely to encourage religious belief and observance, and therefore that we would have to reject it as unconstitutional if we followed the logic of contemporary strict separationism.

In his 1864 announcement Lincoln credited “Almighty God” with the preservation of America for another year and for the blessings it had enjoyed during that year. He then went on to “set apart” the last Thursday of November as a day that he asked “all” of his “fellow-citizens” to observe “as a day of Thanksgiving and Praise to Almighty God the beneficent Creator and Ruler of the Universe.”

The president went on to “recommend” that his fellow citizens should “reverently humble themselves in the dust, and from thence offer up penitent and fervent prayers and supplications to the Great Disposer of events for a return of the inestimable blessings of Peace, Union, and Harmony throughout the land.”

Here we have perhaps America’s greatest president—a man who for many almost embodies America and its aspiration to preserve and live by the Constitution—openly, ardently and officially encouraging his fellow Americans to pray to God—without, of course, presuming in any way to direct how or at what place of worship, if any, they would do so.

Someone, it would seem, has misunderstood the Constitution. Either the Great Emancipator or today’s proponents of strict separation have an incorrect interpretation of the First Amendment.

In view of our nation’s entire history, the idea that Lincoln was wrong and the contemporary liberals are right is pretty much a non-starter. While Lincoln initiated the tradition of Thanksgiving as the last Thursday of November, the practice of issuing presidential proclamations calling for days of thanksgiving extends all the way back to the founding.

The First Congress—the same Congress that wrote the First Amendment—called on George Washington to declare a day of thanksgiving. The Father of his Country readily complied, reminding his fellow Americans that it is “the duty of all Nations to acknowledge the providence of almighty God, to be grateful for his benefits, and humbly to implore his protection and favor.” Washington issued a similar proclamation in 1795, and John Adams and James Madison followed suit during their presidencies.

The liberal case for strict separation of church and state, or for total government neutrality as regards religion, actually departs from liberalism’s usual dismissal of the original understanding of the Constitution. In this realm, finding some founding-era materials with which they can work, liberals instead try to construct an original understanding that achieves the anti-religious aim they desire.

In this endeavor they rely especially on Thomas Jefferson’s “Letter to the Danbury Baptists,” which speaks of the First Amendment as building a “wall of separation between church and state.” There is, however, little reason to think that this letter, or its “wall of separation” metaphor, is a key to the original understanding of the Establishment Clause. Jefferson penned the letter thirteen years after the First Amendment was drafted, a process in which he played no role. It was never noted by the Supreme Court until 1878, and never treated as an interpretation of the Establishment Clause until Justice Hugo Black seized upon it in his 1947 opinion for the Court in Everson v. Board of Education, which originated the modern Court’s doctrine of strict separation.

In addition, Jefferson himself does not seem to have viewed the Establishment Clause as forbidding government officials from using their public statements to encourage religious belief. The “Letter to the Danbury Baptists” itself ends with Jefferson, as president, “reciprocat[ing]” the “prayers” of his correspondents. It is true that out of deference to the principle of federalism, which he believed left religious questions primarily to the states, Jefferson issued no Thanksgiving proclamations of his own.

Nevertheless, he closed the very speech in which he explained this policy, his second inaugural, by inviting his fellow citizens to join him in “supplications” to God, asking him to guide the officers of the government. In sum, Jefferson’s “wall of separation” does not appear to be the same as that insisted upon by modern liberal proponents of strict separation of church and state.

In any case, the tradition of presidential Thanksgiving proclamations reveals the liberal error of supposing a founding consensus that insisted on a strict separation of church and state that would forbid public officials from even speaking out in support of religious observance.

If there were such a consensus, the First Congress would not have asked Washington to issue a Thanksgiving proclamation. And, if he had issued one in the face of such a consensus, it would have been condemned as a dangerous departure from the first principles of American liberty. Instead, all the evidence suggests that the public accepted it as completely harmless and in fact welcomed it as entirely fitting.

Thanksgiving invites us to be grateful for our blessings. Surely those blessings include not only our immense material wealth, but also our heritage of respect for both religion and the Constitution. Gratitude implies a duty to preserve and pass on that heritage, which in turn requires that we reject misrepresentations of it. Thanksgiving thus calls on us to preserve and pass on our tradition of constitutionally acknowledging the blessing of religion, and to leave behind the strict separationism that is inconsistent with that tradition.