In Year Two, Obamacare Is Off to Another Bad Start 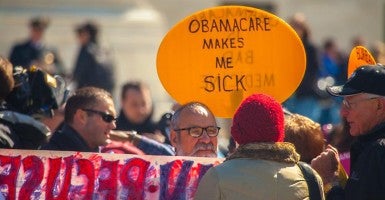 Kenneth Manyari-Magro is a member of the Young Leaders program at The Heritage Foundation.

The implementation of the Affordable Care Act seems like an unending nightmare. Desperate for some good news, the White House is justly relieved and celebrating the fact that the government website is not plagued with last year’s disasters.

But other big challenges loom, including the administration of the law’s hideously complex insurance subsidy system, as well as coverage and cost problems.

Of course, more people do have insurance coverage in 2014 than in 2013. But good grief, at what a cost! The federal taxpayers have shelled out almost $5 billion to help facilitate the process of building the government exchanges–there should be some positive return for that level of spending.   Meanwhile, U.S. Department of Health and Human Services officials recently admitted, for example, that it incorrectly added 380,000 dental plan enrollees to the 2014 coverage total, leaving 6.7 million exchange enrollees as of mid-October 2014.   But what do we actually know about these enrollees’ previous insurance status?

We can’t exactly be sure. But the raw data shows that for the first two quarters of 2014, roughly 8.5 million people got coverage. Behind that big number are two big facts. First, over that same period, 3.8 million individuals lost their employer-based health insurance. So, the net gain in private health insurance coverage over that period turned out to be just 2.4 million persons. Second, of the total growth in coverage over the first two quarters, Medicaid– a poorly performing welfare program,–accounted for 71 percent (6.1 million). Thus far, in other words, Obamacare is largely an expansion of Medicaid.

This was the administration’s intent all along. According to The New York Times, the “…architects of the Affordable Care Act saw the expansion of Medicaid… as a crucial step toward President Obama’s goal of reducing the number of uninsured.” But access to coverage is not the same as access to care. In fact, the professional literature shows that Medicaid provides relatively poor access to quality care.

What about next year? The law is already falling below expectations based on official projections. The CBO originally projected 13 million people would get coverage through the exchanges in 2015. HHS officials now say, however, that between 9 million and 9.9 million will be enrolled in 2015 and that 17 percent of the 2014 enrollees will not renew coverage in 2015.

How about health care costs? The president, and his allies in Congress and academia, devoted lots of hot air and buckets of ink emphasizing that the law would reduce health insurance premium costs for American families.

The reality is very different. Our colleagues at the Heritage Foundation examined the premium data in detail, and found that between 2013 and 2014, premiums in individual health insurance markets increased substantially in the vast majority of states. Even for persons age 50, who benefit from younger people paying more than their actuarial risk would entail, premiums in 13 states went up by 50 percent or even more. For family coverage, the House Committee on Ways and Means reported that families unable to access job-based coverage experienced, on average, a 24.4 percent increase in their premiums.

Meanwhile, there has been a dramatic increase in insurance deductibles for millions of Americans. In 2014, the deductible for a “silver plan” in the federally run exchanges nationwide topped $2,700 on average, compared to the average annual deductible of slightly more than $1,000 for private employer-based plans.

For Obamacare, it’s been another tough month. Republicans won a “wave” election and are organizing to take control of both the House and the Senate in January. The Supreme Court has agreed to hear a case on the legality of the IRS provision of taxpayers’ subsidies in the federal exchanges. Obamacare consultant and Massachusetts Institute of Technology Professor Jonathan Gruber’s candid videotaped comments, including his remarks on the “stupidity” of the American people, have gone viral on social media. It’s hardly shocking that the Gallup pollsters report that the law’s popularity is at its lowest level: Just 37 percent of Americans favor it.

In this fluid environment, there is one constant: Ordinary Americans are a lot smarter than Professor Gruber thinks.