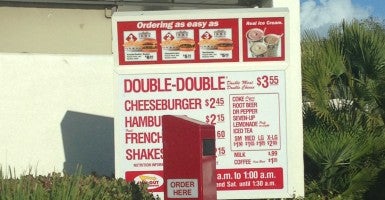 Today, the Food and Drug Administration made its final menu labeling rule available and it’s even worse than expected.

The mandatory menu labeling requirement comes courtesy of Obamacare. Under the statute, “a restaurant or similar retail food establishment that is part of a chain with 20 or more locations” must provide nutritional information for standard menu items.

In April 2011, the FDA issued its proposed rule implementing the Obamacare menu labeling requirement. The agency decided that it was going to grab far more power than the plain language of the law even allowed.

Instead of covering just restaurants and businesses that are “similar retail food establishments,” the FDA decided to ignore the word “similar.” Under the proposed rule, grocery stores and convenience stores were also covered under the rule. For example, a convenience store whose floor space is 99 percent devoted to packaged goods would still be included if it sells prepared hot dogs. That 1 percent makes the entire business operation similar to a restaurant, at least from the FDA’s perspective.

The final rule has taken this FDA power grab to a whole new level. The FDA is now requiring more businesses to comply with the law, such as movie theaters and bowling alleys.

Dietary Decisions. Mandatory menu labeling presumes that Americans are too ignorant to make informed dietary decisions, so the federal government must intervene. When people make less healthy choices at a restaurant, this is somehow seen as ignorance. However, people don’t generally go to restaurants to purchase the healthiest item. For example, most people don’t go to a steakhouse to eat kale.

Further, diets are extremely complex; someone who eats less healthy food at a restaurant than someone else may have a much healthier overall diet because of what the individual eats outside restaurants. Exercise would also need to be taken into consideration. Most importantly, individuals should be able to make personal dietary decisions, even if that means they do eat less healthily than some know-it-all federal bureaucrats thinks is wise.

Inadequate Research. Even for proponents of nutritional central planning, a menu-labeling standard is putting the cart before the horse. Existing research on whether menu labeling has an impact on nutrition is at best unclear. According to the United States Department of Agriculture’s Economic Research Service, “The mixed results of these and other small-scale menu labeling studies suggest it is still too early to tell how restaurant calorie labeling will affect caloric intake.”

The FDA is supposed to be concerned about food and drug safety, but they are overreaching into areas that the agency has no business in, confusing health with safety. They did have to implement a menu labeling rule, and Congress should be blamed for that. However, they didn’t have to use the Obamacare menu labeling requirement as a way to impose requirements beyond what even the statute requires.

Congress should address this rule, but they also need to look at the role of FDA generally as it tries to become the nation’s nutritionist.