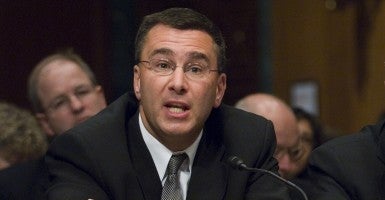 Another one bites the dust. After videos surfaced of Obamacare architect Jonathan Gruber calling the American people stupid, North Carolina became the second state in two weeks to pull its contract with the economist.

State Auditor Beth Wood, a Democrat, decided to terminate Gruber’s $200,000 contract late last week, according to a timeline of work done for North Carolina by Gruber, a health economics professor at Massachusetts Institute of Technology.

“Gruber’s comment that it was all right to mislead people to get a desired outcome that he favored led our auditors to determine he had at least the appearance of an independence impairment,” Bill Holmes, a spokesman for the auditor’s office, told WRAL-TV.

>>> Meet the Man Who Found the Jonathan Gruber Videos

Gruber’s comments also led to the termination of his $400,000 contract with the state of Vermont. He was paid $160,000 before Gov. Peter Shumlin, a Democrat, decided to end the contract.

North Carolina’s Office of the State Auditor hired Gruber last November to look at the effectiveness of Community Care of North Carolina, a state program that provides managed care to those enrolled in Medicaid.

Gov. Pat McCrory, a Republican who took office in January 2013, has worked with state lawmakers on potential state Medicaid reforms.  Gruber spent the year analyzing data from the state Department of Health and Human Services to determine whether Community Care of North Carolina should be included in reform plans.

The timeline from the auditor’s office shows that the agency took note of the media attention Gruber garnered Nov. 12 after videos of him mocking the American public went viral on social media.

Wood then met with state legislative leaders Nov. 18 to discuss terminating Gruber’s contract, which officially was ended the next day.

Holmes told The Daily Signal in an email:

Dr. Gruber demonstrated that he had at least the appearance of what we call an ‘independence impairment.’ That is, he at least appeared to lack independence in this matter.

The auditor’s office will pay Gruber $100,000 for his work with the state.

Over the past two weeks, multiple videos of Gruber discussing the Affordable Care Act have come to light. In the first one to surface, from a 2013 event before North Carolina hired Gruber, the MIT professor discusses how the Obama administration and Senate Democrats manipulated the language of the health care bill to ensure its passage.

>>> The Millions of Dollars Jonathan Gruber Got from You, in One Chart

In the video, Gruber tells his audience that Senate and House Democrats passed the Obamacare law with a deliberate “lack of transparency,” a feat he attributed to the “stupidity of the American voter.”

Subsequent uncovered videos show Gruber calling the American people “stupid” and mocking a man who expressed concerns about the effects of Obamacare.