Maryland Questions Its Taxpayer Subsidy for ‘House of Cards’ 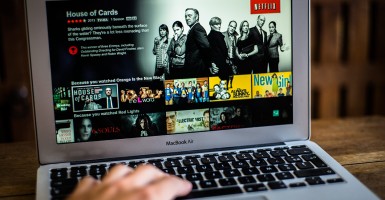 Maryland politicians cast their film incentives program as the only way to lure productions such as “House of Cards” and boost the state’s economy.

Yet, a new report suggests, it could be that star-struck politicians and Hollywood producers are deceiving taxpayers just like the characters do in the popular fictional television show, which dramatizes the cunning trickery and cutthroat tactics of Washington, D.C.

From fiscal year 2012 to 2016, Maryland will have doled out $62.5 million in refundable tax credits for the film industry, with 96.5 percent of that total going to the production of two television series—”House of Cards” and “VEEP.”

Despite all of those breaks for Hollywood and claims of economic growth, a new study by the state’s legislative watchdog arm recommends the Maryland General Assembly allow for the subsidies to sunset in 2016.

“As soon as a film production ends, all positive economic impacts cease, too,” the report from the Maryland Department of Legislative Services reads. “Going forward, DLS recommends that the General Assembly focus economic development efforts on incentives that create permanent and lasting employment, rather than temporary jobs.”

Maryland’s study confirms what others have discovered across the country.

Politicians may mean well, but the economic effects aren’t nearly as crystal clear as they’re often pictured, said Bob Tannenwald,  the former senior fellow for the Center for Budget and Policy Priorities who wrote the CBPP study in 2010.

“[Lawmakers] think they’ve found a golden goose in terms of job creation and income creation,” Tannenwald said. “In fact, they’re something else that isn’t very effective and is taking money away from other needs—like education.”

“And then there’s just the psychological [aspect],” Tannenwald said. “People enjoy seeing superstars walking down the street and eating at a café.”