ISIS Is Getting Smarter About Avoiding U.S. Surveillance 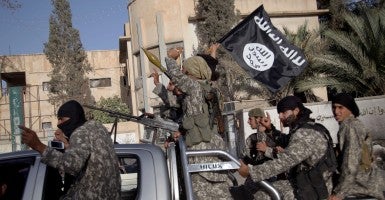 One amendment would address the fight against ISIS. (Photo: Newscom)

Social media can be a double-edged sword for terrorists groups such as ISIS, a fact that its leadership appears to be aware of.

According to recent reports, the group’s top cadre has curtailed electronic communications, hoping to shrink its footprint and exposure to western intelligence agencies. A terrorist group of the 21st century, ISIS is adept at the use of social media, producing “cruelly effective” propaganda, as retired Marine Corps Gen. John Allen has put it. Yet, that same propaganda also has provided a wealth of information for the U.S. and other governments.

As reported by The Daily Beast’s Shane Harris, who cited U.S. intelligence sources, ISIS is changing its “communications strategy.” It is encrypting its electronic communications, limiting its online presence and using services that delete messages as soon as they are sent.  Its top cadre uses couriers rather than electronic devices to deliver orders, making them elusive in the U.S.-led surveillance campaign. As human intelligence is hardly available on the ground, especially in Syria, and the number of unmanned drones is limited, cyber surveillance has been a key tool in the fight against ISIS.

Yet, although ISIS leadership may be wise to its cyber vulnerabilities, its followers are not as easy to control in the electronic sphere. The group disseminates its grisly propaganda on social media, and its thousands of followers and recruits continue to post pictures and information on their social media accounts.

According to reports by communications expert James Farwell published by the London-based Institute for International Strategic Studies, “advances in technology may eventually leave the group vulnerable to cyber attacks, similar to those reportedly urged by U.S. intelligence sources to intercept and seize funds controlled by Mexican drug cartels.”

Communications strategy must be a critical component in combatting this latest form of violent Islamism, which itself uses propaganda so effectively to magnify its own image of invulnerability.  Most effectively, writes Farwell, would be a message that shows the opposite, that the United States and its allies are powerful and determined to win. (Though unfortunately that has hardly been forthcoming yet.)

Communications strategy is currently in the hands of Rick Stengel, undersecretary of state for public diplomacy. Stengel recently attended a meeting with Arab nations in Kuwait to discuss precisely this issue and encourage their participation in the communications battle. It is clear though, as Farwell writes, that information warfare should be seamless with military tactics, allowing Gen. Allen to coordinate the resources of the whole of the U.S. government.  Strategic communication is as important today as at any time during the Iraq and Afghan wars.