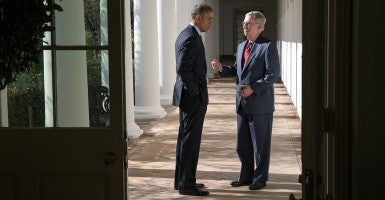 Republican leaders have zeroed in on a few options to keep the government running while confronting President Obama’s impending executive action to reshape the nation’s immigration system.

Obama’s intent to act alone to change enforcement of immigration laws — potentially deferring deportation for millions of illegal immigrants — complicates efforts by Congress to fund the government past Dec. 11, when current funding expires.

>>> Obama to Explain How He Will Reshape Immigration System

Republican lawmakers are discussing methods designed to use the power of the purse while avoiding another government shutdown — something all parties insist they want to avoid.

“I have not actually heard any conservatives say that [a shutdown] is an option,” one conservative Senate aide told The Daily Signal. “No one is making the case for that. I don’t think anyone wants to see that. No one is angling for that and no one thinks it’s necessary. We can attain our goals without doing that.”

No one is “angling” for a government shutdown, says a conservative Senate aide.

One option under consideration by leadership of the House Appropriations Committee is to pass a bill to fund the government until next fall but have the new Congress look to rescind funding next year from agencies that carry out any executive order by Obama on immigration.

Another option: Pass two separate funding bills — a short-term bill holding back funding for immigration enforcement agencies such as the Department of Homeland Security and another measure funding the rest of the government for a full year.

Conservatives continue to push their own strategy of passing a clean, short-term bill through what is called a “continuing resolution.” That would allow lawmakers to come back to the spending fight early next year, after the GOP assumes control of  the Senate as well as the House.

Then, in full control of the process, Republicans could begin withholding funding the president would need to implement his changes to the immigration system.

Republican leaders intent on showing they can govern without what Democrats call “brinkmanship” worry that passing a series of stopgap spending bills would put lawmakers at loggerheads yet again.

Still, conservatives don’t see their strategy playing out like it did in 2013, when they tried to defund Obamacare.

“There’s a big difference between a governmentwide shutdown and a targeted measure that eliminates funding for one or two agencies out of the entire government,” said the Senate aide, who requested anonymity to speak freely about internal politics.

The 2013 government shutdown over Obamacare is not like the current immigration situation, says one Senate aide.

Other Republicans, though, argue that even if the government doesn’t shut down, the possibility alone — coming from revisiting funding every few months — would prevent Congress from being productive.

The “rescission” option, in which Congress would try to remove specific funding next year after the budget passes, could be less explosive, some say.

A staff member with the House Appropriations Committee, also requesting anonymity, told The Daily Signal that rescission could be more focused than withholding money through the budget process.

“A rescission package is much more targeted/sharper than a CR [continuing resolution] or rider,” the House staff member wrote in an email. “It could affect exactly the accounts responsible for implementation, instead of something larger that could have undue harm on Homeland Security programs.”

Some conservatives, including Sen. Mike Lee, R-Utah, worry that if Congress gives Obama the money he needs now, it will be difficult to take it back later.

“Rescissions are legislation he [Obama] can veto,” Brian Phillips, Lee’s communications director, said in an interview with The Daily Signal. “We don’t want to give him money on the front end and then expect him to sign off on taking away that money on the back end.”

The House appropriations staffer contends that the short-term budget favored by conservatives would not survive the president’s veto.

Conservatives, however, want to pressure Obama into making that choice.

“He can still veto the short-term CR [continuing resolution],” Phillips said of Obama.  “But if he won’t accept that, it’s on him if the government doesn’t stay open.”