How the War on Poverty Has Hurt American Marriage Rates 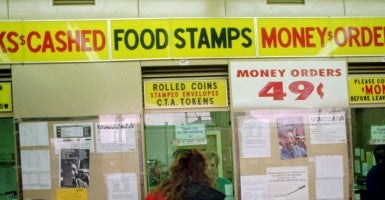 Elisa King waits in line at a Larmie Avenue currency exchange to pick up her welfare check and food stamps. (Photo: Newscom)

It is no accident that the collapse of marriage in America largely began with the War on Poverty and the proliferation of means-tested welfare programs that it fostered.

When the War on Poverty began, only a single welfare program—Aid to Families with Dependent Children —assisted single parents.

Although married couples with children can also receive aid through these programs, the overwhelming majority of assistance to families with children goes to single-parent households.

The burgeoning welfare state has promoted single parenthood in two ways. First, means-tested welfare programs such as those described above financially enable single parenthood. It is difficult for single mothers with a high school degree or less to support children without the aid of another parent.

Means-tested welfare programs substantially reduce this difficulty by providing extensive support to single parents. Welfare thereby reduces the financial need for marriage. Since the beginning of the War on Poverty, less-educated mothers have increasingly become married to the welfare state and to the U.S. taxpayer rather than to the fathers of their children.

As means-tested benefits expanded, welfare began to serve as a substitute for a husband in the home, and low-income marriage began to disappear. As husbands left the home, the need for more welfare to support single mothers increased. The War on Poverty created a destructive feedback loop: Welfare promoted the decline of marriage, which generated a need for more welfare.

A second major problem is that the means-tested welfare system actively penalizes low-income parents who do marry. All means-tested welfare programs are designed so that a family’s benefits are reduced as earnings rise. In practice, this means that, if a low-income single mother marries an employed father, her welfare benefits will generally be substantially reduced. The mother can maximize welfare by remaining unmarried and keeping the father’s income “off the books.”

For example, a single mother with two children who earns $15,000 per year would generally receive around $5,200 per year of food stamp benefits. However, if she marries a father with the same earnings level, her food stamps would be cut to zero.

A single mother receiving benefits from Section 8 or public housing would receive a subsidy worth on average around $11,000 per year if she was not employed, but if she marries a man earning $20,000 per year, these benefits would be cut nearly in half. Both food stamps and housing programs provide very real financial incentives for couples to remain separate and unmarried.

The marriage penalties from multiple programs when added together can provide substantial financial disincentives to marriage. For example, if a single mother who earns $20,000 per year marries a man who earns the same amount, the couple will typically lose about $12,000 a year in welfare benefits. In effect, the welfare system makes it economically irrational for most low-income couples to marry.

The anti-marriage aspect of the welfare state can be illustrated by comparing means-tested welfare with the federal income tax code. For example, under a progressive income tax system with only a single schedule of tax rates indiscriminately covering both single persons and married couples, nearly all individuals would experience an increase in taxes owed when they married and lower taxes if they remain separate or divorce. The current federal income tax system mitigates this anti-marriage effect by having separate tax schedules for singles and married couples.

By contrast, the means-tested welfare system, in most cases, does not have a separate schedule for married couples. When a low-income mother and father marry, they will generally experience a sharp drop in benefits, and their joint income will fall. The anti-marriage penalty is often most severe among married couples where both parents are employed.

These marriage penalties are harmful to mothers, fathers, children and society at large. Reform is needed. Yet with over 80 different means-tested aid programs, the U.S. welfare system is complex. Eliminating all anti-marriage incentives in these programs overnight would be extremely expensive.

Marriage is good for children, mothers and fathers, but marriage is disappearing in low-income communities. In part, this is due to the fact that the U.S. welfare system actively penalizes many low-income parents who do marry.

The anti-marriage incentives built into the welfare state are indefensible. Policymakers should reduce welfare’s marriage penalties.

This is adapted from “How Welfare Undermines Marriage and What to Do About It,” an issue brief released by The Heritage Foundation.