A Year After Glitch-Filled Rollout, HealthCare.gov Opens for Business Again 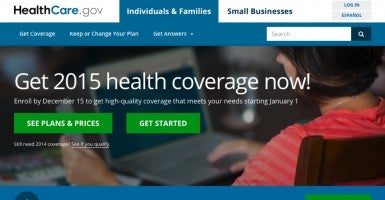 It’s that time of year: HealthCare.gov is officially open for business.

More than a year after HealthCare.gov experienced a glitch-filled rollout, the health insurance marketplace opened once again, though with much less fanfare compared to last October’s implementation.

The Obamacare rollout last year saw a flood of 2.5 million Americans attempting to sign up for health care through the federal marketplace at HealthCare.gov — traffic the site wasn’t equipped to handle. As a result, the site effectively crashed, and just six consumers were able to successfully complete applications.

This year, though, the Department of Health and Human Services reported only minor glitches for those enrolling and returning to HealthCare.gov. According to reports, some pages of the site hadn’t yet been updated, and consumers found notices stating the open enrollment period hadn’t yet started.

Still, the Obama administration boasted a smooth start to an open enrollment period lasting half the time of last year’s — from Nov. 15 to Feb. 15.

>>> Cartoon: Obamacare is Heading Back to the Supreme Court

Health and Human Services Secretary Sylvia Mathews Burwell said 23,000 applications had been filed through the marketplace within the first eight hours after it opened on Saturday at 1:30 a.m. By the end of the first day, that number jumped to 100,000.

“The vast majority of people coming to the site were able to get on and do what they were intending to do,” she said Sunday on “Meet the Press.”

Burwell added that more than 500,000 people had successfully logged on to the site since the start of the second open enrollment period.

Officials with HHS projected between 9 million and 9.9 million consumers will have health insurance coverage through Obamacare by the end of 2015. Consumers can use HealthCare.gov to log into existing accounts, create new ones and enroll for the first time, or automatically re-enroll in their same plans.

The figures for how many do so should be available to HHS immediately.

Those who choose to automatically re-enroll, though, could find the cost of the premiums for plans they like to be more expensive than they were last year, the administration said last week.

To avoid paying more, people will have to change plans.

Consumers who don’t select new plans by Dec. 15 will be automatically re-enrolled. The Obama administration touted the law as offering an opportunity for those previously uninsured to receive health insurance coverage. A review of enrollments by The Heritage Foundation found that the majority of those newly insured enrolled in Medicaid, which expanded under the Affordable Care Act.

An October poll from the Kaiser Family Foundation found that 89 percent of the uninsured didn’t know the open enrollment period opened Nov. 15.

HHS tasked CGI Federal, a Canadian company, with building HealthCare.gov. However, after the rollout last October proved to be disastrous, HHS fired the company. It then made QSSI, a Maryland-based technology company, the lead contractor. HHS also hired Accenture to fix the broken website.

In many hearings on the Obamacare rollout, it was discovered HealthCare.gov was never fully tested — a discovery that angered many congressional Republicans. The failed implementation of the law may have contributed to then-HHS Secretary Kathleen Sebelius’s resignation.

This year, though, full end-to-end testing of the site was completed before Saturday’s launch, officials said. Additionally, Accenture boosted the number of concurrent users HealthCare.gov could handle to more than 200,000.

In addition to the drastic technical turnaround from last year’s rollout of HealthCare.gov, consumers were able to “window shop” for insurance plans before the open enrollment period began. Burwell said more than 1.2 million Americans employed the feature, which allowed people to browse the types and prices of plans offered by participating insurance companies.

Last year, consumers were required to complete a lengthy registration process on HealthCare.gov before perusing plans.

Though Burwell said she was pleased with the start of the second open enrollment period, it was met with little fanfare as attention turned to comments made by Jonathan Gruber, a Massachusetts Institute of Technology economist who helped craft the law and who has suggested in a video clip that emerged this month that advocates of the Affordable Care Act were not transparent about the law’s likely effects.

>>> The Extreme Advertising by Insurance Companies in the Obamacare Era

In the first video to come to light, Gruber discusses how a “lack of transparency” helped the White House pass the law, which he said was because of the “stupidity of the American voter.” In subsequent videos, Gruber calls the American people “stupid” and mocks a man concerned about the effects of the law.

During a press conference Sunday, President Obama addressed Gruber’s comments and attempted to downplay his role in constructing the law. The president, speaking at the G20 summit in Brisbane, Australia, said Gruber was “some adviser who never worked on our staff.”

Burwell also discussed the Obamacare architect’s comments during her appearance on “Meet the Press” and dismissed Gruber’s claim that the law was passed because of a lack of transparency.

“Since I’ve been at the department, one of the things I’ve focused on is transparency, making sure that all our numbers come out whether they’re good or bad,” she said. “And the other thing is that the law is based on the issues of transparency and belief in the American people and choices in the marketplace.”